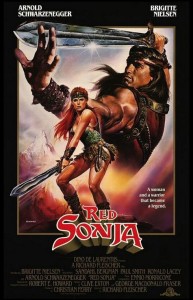 The acting is another huge setback for the film. The direction given to the actors by director Richard Fleischer must have been something like, “Act like a tree,” because everyone delivers their lines in the most wooden, flat way possible. Even Arnold is unable to inject any amount of charisma or life into his performance. He clearly didn’t care about this one, and honestly if an actor isn’t going to care about a movie he’s making, Arnold definitely picked a good one to breeze his way through. The muted quality that the adult actors exhibit only makes the animated, loud kid stand out even more, much to my chagrin.

But at least Kalidor and Red Sonja face off against a vile sea serpent, right? They do, but to call it anything other than LAME AS FUCK is 180 degrees from the truth. And I say that with every ounce of my being loving B-Movies and all their horrible, wonderful delights. This water monster is horrible, and for anyone that’s seen the cut scene of the octopus from The Goonies and thought, “Hahaha, I guess that’s why they cut it,” look no further than Red Sonja for a more ambitious version of a similar idea that drowns with equal force. Apparently 1985 was the year the film industry unsuccessfully tried to bring water-based monsters to the big screen.

Perhaps the most egregious offense to the viewer is that the story is incomprehensible. Red Sonja is trying to get revenge because the Queen killed her family, but this never really matters. After killing Red Sonja’s family for some unexplained or obscured reason, the Queen steals a giant, glowing green talisman that was apparently used to make the world. So Red Sonja is off to destroy the talisman so the Queen can’t use it for evil… or something. To even describe it in a few sentences gives it the appearance of coherence, which it is sorely lacking. The characters are also horribly underwritten, but yet still keep spouting dumb dialogue that means nothing. A lack of character development is fine as long as your visual storytelling is interesting and engaging enough to carry a movie, but there’s very little of either in Red Sonja.

Red Sonja is a horrible film, and I’m sure it is largely responsible for the fact that no further Conan films were made until the remake in 2011. Arnold is on record saying that he believes this to be his worst film, and so far I have to agree. You could throw pretty much any negative adjective at this one and I wouldn’t bat an eye. Arnold deserved better, Red Sonja deserved better, we deserved better. There are shreds of potential here and there, but they only serve to make Red Sonja an even more frustrating experience because you can imagine where it might have made for an enjoyable fantasy adventure.

There was this, though:

Next up in this chronological journey through the films of Arnold Schwarzenegger is one of my all-time favorites, Commando! I won’t get to let off my steam until November, though, as I’ll be checking out the Conan remake first, and then comes Horrific October! See ya then!