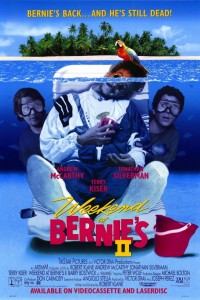 But I’m already well corrupted, so I thoroughly enjoyed the wild and wacky bullshit that populates Weekend at Bernie’s II. After Silverman and McCarthy leave Bernie at the coroner’s, he’s promptly stolen by a couple of guys under the spell of a voodoo priestess who is working for a drug cartel boss that wants the money Bernie stole from him. These guys take Bernie to the bathroom of a porno theater (again, this is a PG movie) and perform the voodoo resurrection ritual. Thing is, as most henchmen tasked with something incredibly important, they fuck it up royally by using a dead pigeon instead of a chicken. Well, they had a chicken, but it escaped into the theater and they lost it. They do find a guy holding and stroking a chicken, but it was his. A real chicken. Geez, get your minds out of the gutter! This is a PG-rated kid’s movie, and in no way, shape, or form are they insinuating that some of the men might be holding and/or stroking their cocks while watching the skin flick. And you love your mother with that mind!

God, I’ve tried to do a simple plot synopsis paragraph three times, and each time it has devolved into side tracks and jokes. The film is also like this, strange and unfocused, but the main drive is the same thing that was the catalyst for the first film: Bernie’s embezzled $2 million dollars. After dropping off Bernie at the coroner’s, McCarthy signed for his personal effects by saying Bernie was his uncle and he walked out with the key to Bernie’s safe deposit box on the island of St. Thomas. Sounds like we’re going on a trip to a weekend at Bernie’s vacation hotspot! The only problem is that in order to open the box and get the money, they need Bernie. D’oh! This time they’re not just dragging Bernie around for their lives and the pursuit of a bitchin’ weekend, now it’s on a whim for personal profit and theft!

The live characters in this film continue their defined roles well, with Andrew McCarthy once again playing the reckless, money-hungry fool to Jonathan Silverman’s more cautious, but still money-hungry character. McCarthy’s asshole tendencies are amplified much more here as well, as he straps on Bernie’s watch and starts charging up a storm on Bernie’s credit card as soon as they step outside the coroner’s office. Where Silverman was given a love interest in the first, he’s not given much of anything to do in this sequel. McCarthy is given something of a love interest, but she’s nothing more than a plot device put there to give the guy’s some voodoo info when they need it. But get this, during the entire length of Weekend at Bernie’s II, the guys never really reprise their classic puppeteering of Bernie’s corpse. In fact, he’s not even with them for most of the movie, and when he is, he’s stuffed in a suitcase or jammed in the fridge (don’t try this at home with Grandpa, kids!). 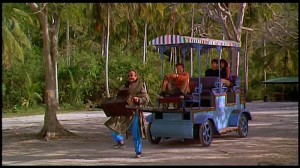 As much as this fact might pain me, the reanimated zombie Bernie is so fucking great that it nearly nullifies any and all wrongdoing on the part of this film. Even though Bernie does almost exactly the same thing in every scene, that one thing is fantastic. It’s only Bernie dancing himself up from the ground and then walking around, but Bernie’s shakin’ ass and bobbing head never failed to amuse me. Apparently I’m not the only one in love with his dance moves, as it has spawned a dance craze called “Movin’ Like Bernie”. Dancin’ Bernie also gives actor Terry Kiser more room for comedy, and his physical acting as the zombified Bernie is superb. How superb, you ask? Well, don’t take it from me, take it right from the corpse’s mouth– er, face!

There’s so many over-the-top moments that are worth mentioning, but I’m unsure how to work them into this review naturally. Ahh, but how I can I not mention when McCarthy straps Bernie to a horse-drawn cart in place of the horse, which leads to a chase down a mountain that felt somewhat inspired by Harold Lloyd’s horse-drawn streetcar chase in the 1928 silent film Speedy? And in one of my favorite moments: after Silverman is cursed by the priestess and quickly losing his life, McCarthy tells him not to worry. What he really meant to say was, “Don’t worry, man. If you die and I still have something to gain from having you around, I will literally stop at nothing to drag your rotting corpse by my side, just like we did with Bernie! The good old days will never die!” There may be villains in these films, but I propose that Andrew McCarthy plays the one true villain of the series.

Weekend at Bernie’s II ends on a freeze-frame of Bernie walking in the island’s carnival parade. We don’t need to know his fate after this moment. By cutting it off here, we’re left in a position to imagine Bernie continuing on in this manner for as long as time tick-tocks along. Maybe, just maybe, Bernie’s still out there somewhere, a little worse for the wear, searching for happiness and a never-ending groove. Even in death, Bernie’s not all that different from you and me.