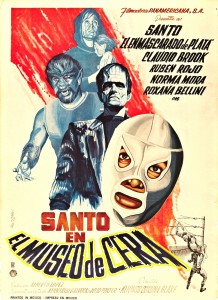 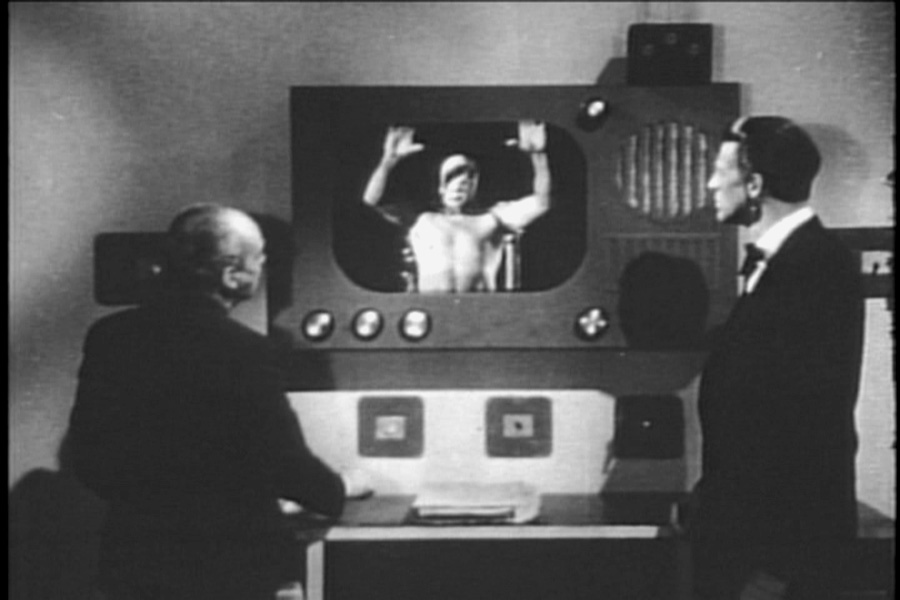 The movie opens in the titular Wax Museum as the curator, Dr. Karol, is providing a guided tour for some interested guests. Along for the tour is a visiting photojournalist named Samantha. After showcasing some of the museum’s tamer pieces which include pretty impressive life-sized reproductions of Ghandi, Gary Cooper, Joseph Stalin, and Pancho Villa (hey, you gotta represent), he leads the visitors downstairs to the lower gallery which showcases a fantastic collection of underappreciated, second-tier monsters. Mr. Hyde, Frankenstein, Quasimodo, and the Phantom of the Opera are all represented, among others. Perhaps the coolest in the collection is the simply bizarre-looking creature called “The Bloodthirsty Beast” which looks like an inspired mishmash of The Wolf Man with Amy Winehouse (which I guess makes him look a little more presentable than the real Amy Winehouse). Samantha seems very interested, and is snapping away at the figures, much to the delight of Dr. Karol. But when she later goes missing, police focus their investigation on the Doctor and begin tossing around accusations of foul play. 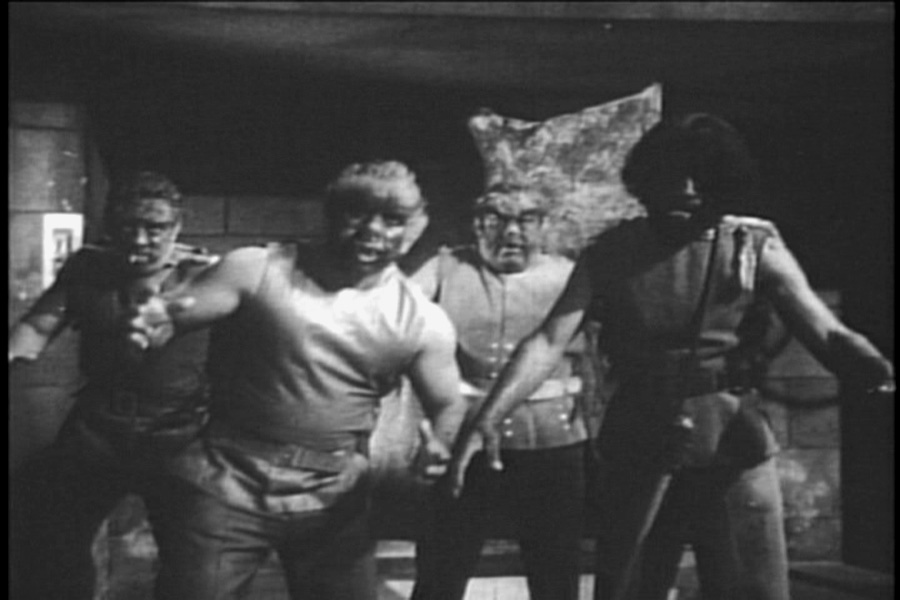 Dr. Karol insists that he is innocent and asks for the help of his friend, Professor Galvan. The Professor, being a man of science in the country of Mexico, naturally means that he has Santo connections. He calls up Santo on the usual, government-issue Santo communication equipment and the Man in the Silver Mask begins conducting his investigation. In reality, Dr. Karol has kidnapped Samantha and has some pretty fucked-up plans to transform her into a living wax creature called “The Panther Woman”. Tossing Santo a few red herrings, he hopes to throw him off course, giving the mad doctor plenty of time to see his evil plan come to fruition.

Far from simply being a sick bastard, it’s revealed that Dr. Karol’s twisted motivations come from his time spent in the concentration camps of Auschwitz during World War II. Watching the Nazis torture his friends and family in unthinkable ways left an indelible scar of Dr. Karol’s psyche. No longer seeing beauty in the world, the doctor became obsessed with the deformed characters populating his wax museum. Samantha, being a thing of beauty, must be destroyed and transformed into something far more hideous… hence the “Panther Woman”. It was a little strange seeing a villain with this much depth and tragic neuroses acting as the heel in a Santo film. But it definitely was a welcome twist on the usual formula and ends up giving the film a very rewarding layer of depth. The mere fact that this film is able to offer up social commentary of the very real horrors of human beings while at the same time offering a scene where Santo takes on a trio of mutant pig monsters says a lot I think on the silliness and asinine stupidity of dismissing B movies as nothing more than unredeeming garbage. 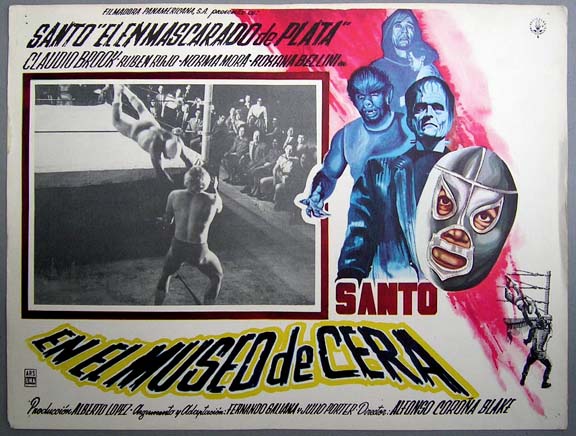 Another great thing about Santo in the Wax Museum is that it’s probably the first time in the Santo timeline that we get to see our masked hero as something more than simply a wrestling superman. This is still fairly early in the series, and although the preceding films had slowly been building upon the Santo mythos, I think this is the first time we really get to see the more intellectual aspects of his character. Santo spends a lot of time hunkered down in his secret science lab going over clues, developing and analyzing film, and researching data this time around. As much as I love seeing Santo kicking the shit out of monsters and aliens, nothing beats a meaty masked badass who also has the smarts to foil the plans of his enemies. Santo really is the Batman of the lucha world, and totally deserves The Dark Knight treatment. 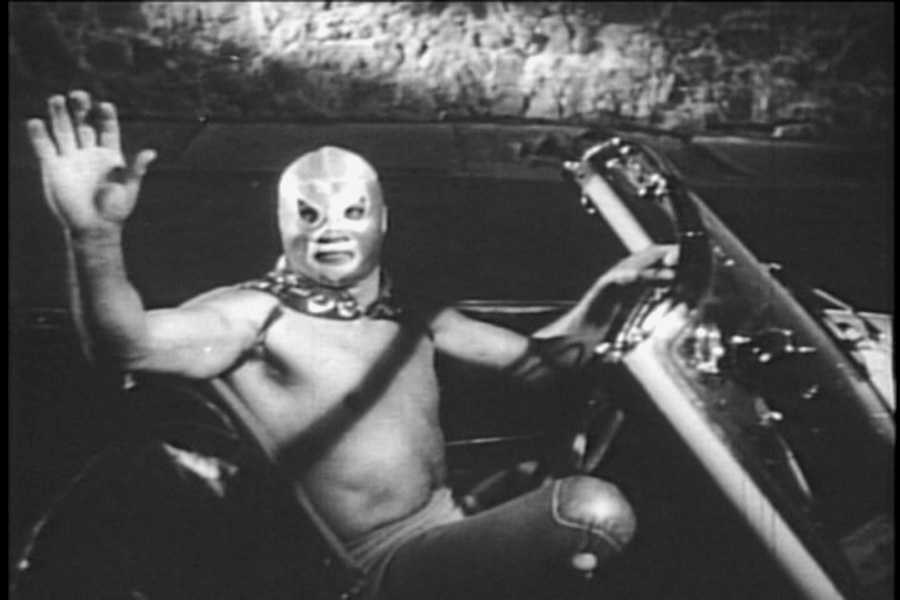 As strong a film as this is (and I truly believe it to be my personal favorite in the series) the wrasslin’ is only so-so… which I guess can be seen as a testament to the strength of this film’s plot and direction. There are three matches in the ring interspersed throughout the film, and not only does Santo spend most of his time getting his ass handed to him, but the matches themselves have nothing at all to do with the film’s narrative. Even the recycled “monster masquerading as a masked luchador” device goes unused here. Oh well, the film does have a couple of decent battles outside of the ring, namely when Santo takes on a couple of heavies in his science lab, where lab equipment starts sparking and shit for no real reason. Towards the end of the film we have the aforementioned battle between Dr. Karol and his three pig monsters, which is easily the best in the film as Santo dispatches a bunch of bad guys with an enormous vat of boiling wax.

This truly is a slice of heaven. Although deviating a bit from the traditional formula, this film offers one of the deepest and most interesting villains in lucha cinema while at the same time developing the Santo legend more than any film before it had. Defender of justice, man of science, master detective, and man of mystery… he was born Rodolfo Guzmán Huerta, but will live forever in the hearts of men as Santo.