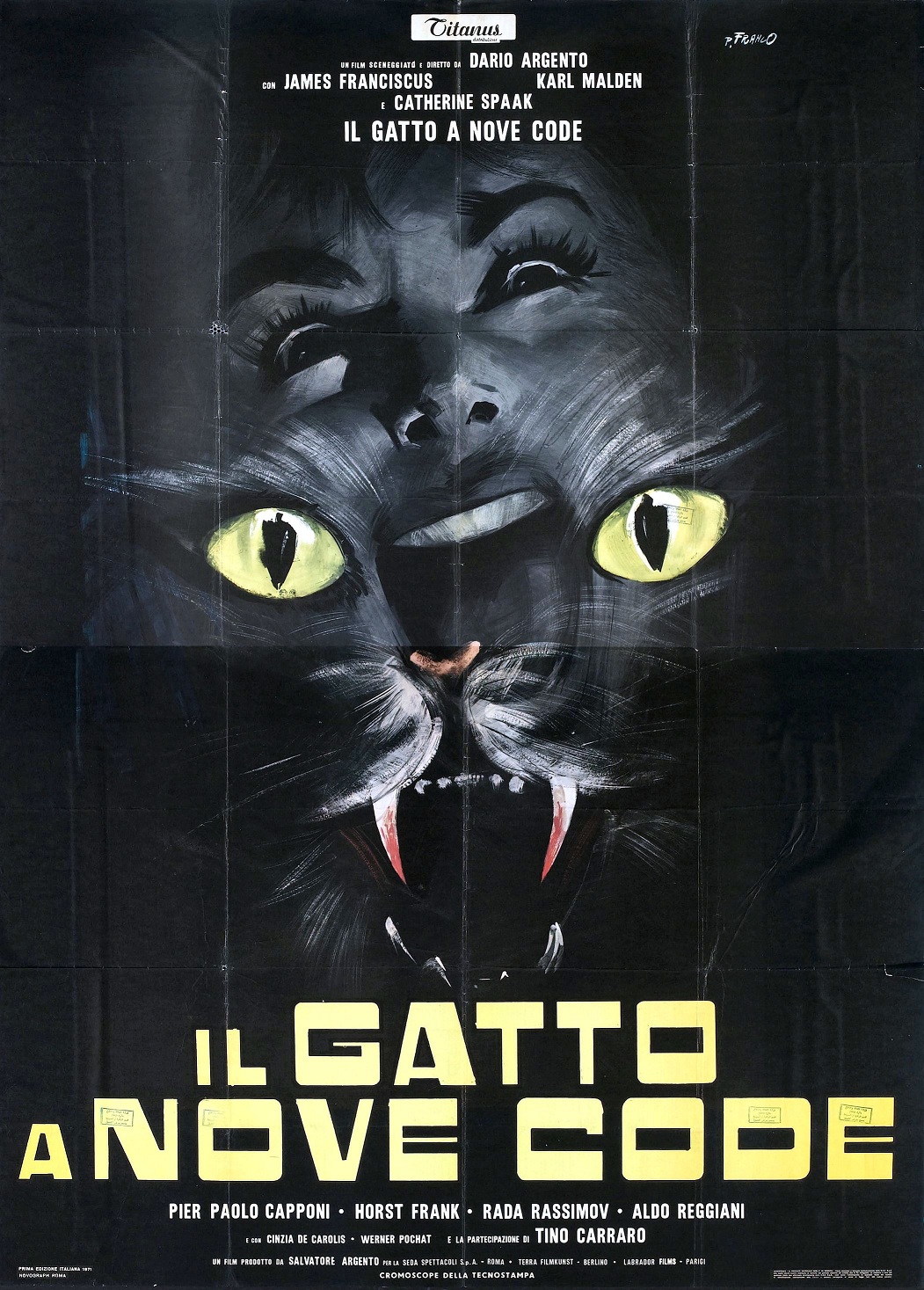 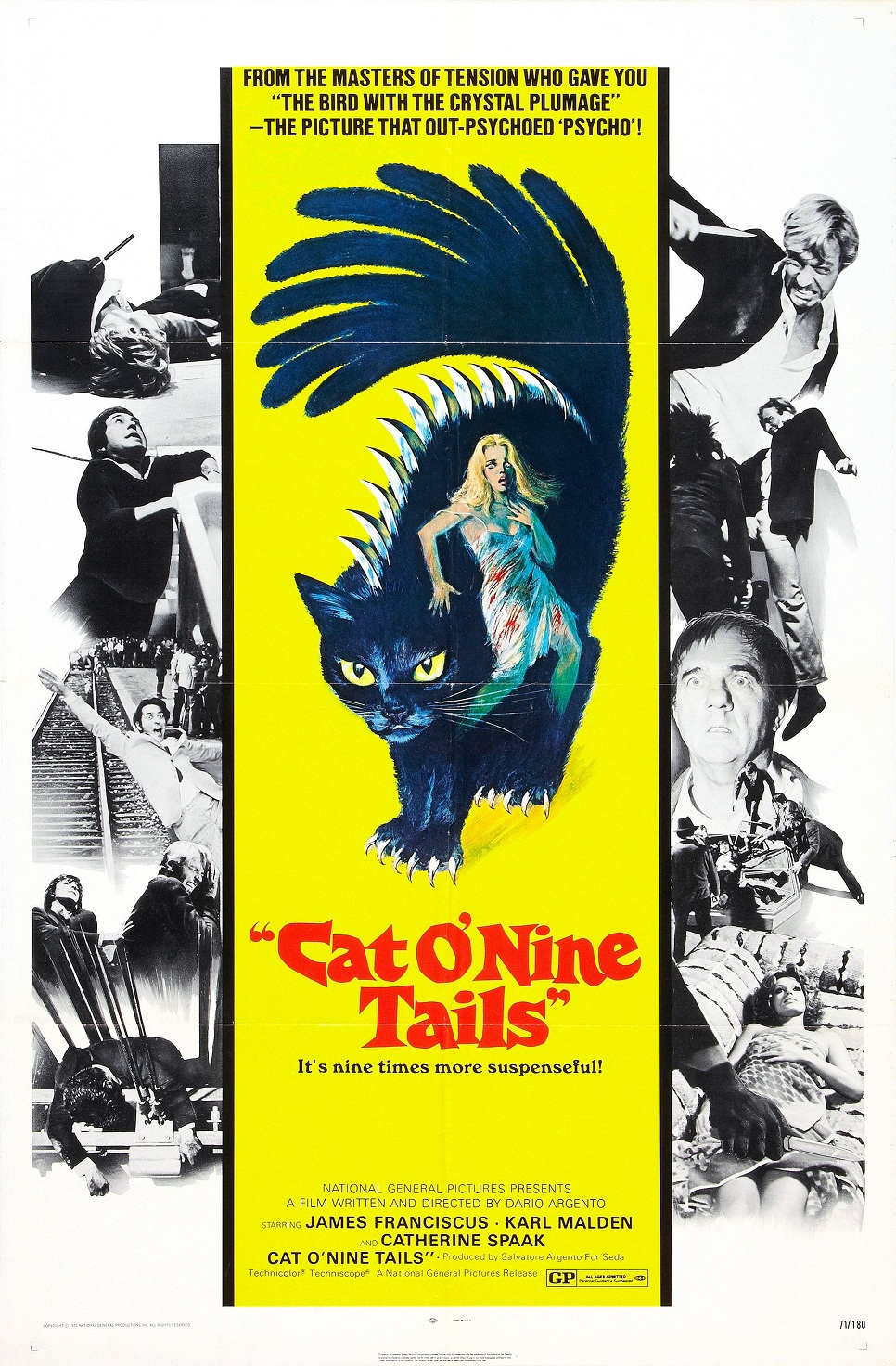 A blind man named Franco (Karl Malden) and a little girl walk home at night passing a strange red car. Franco asks the girl to look at the people in the car, as he has an odd feeling about it. The girl notices one man’s face but cannot see the other. This small, meaningless exchange sets in motion the entire film. A true mystery until the end, the story weaves a twisted blend of murder, betrayal and corporate espionage with a few hints of homosexuality. It’s the kind of film that upon first viewing is a bit much to take in with its many characters and plot lines. I have the feeling that I’d like it more the second time around, at least from a story standpoint, but this brings me to the main problem I have with this film.

If The Bird with the Crystal Plumage was a new director showing off his passion and energy through great camerawork and a fun story, then The Cat o’ Nine Tails is that same director feeling bored and somewhat detached from his story. When I go through a director’s work, I expect to eventually run into a film where it’s obvious they phoned it in. I really didn’t expect it to be Argento’s second film though! The film at times feels like an American production trying to duplicate the success of Argento’s first film, which is an odd sort of feel to have. Some of this can be attributed to the presence of Karl Malden, but most of it is probably the fact that the cinematography is far less striking and defined as it was in the prior film. It’s not really fair to hold them against each other, but realistically if this was Argento’s first film, he would not have created a sensation that rippled throughout the entire Italian film industry. It’s almost as if that success went to his head. Anyway, in The Cat o’ Nine Tails Argento chooses to reuse a lot of the major camera tricks used to great effect in the prior film. On one hand you could say he’s establishing a style and just “being himself.” I’d like to believe that, but that theory only works if both films use the techniques well. 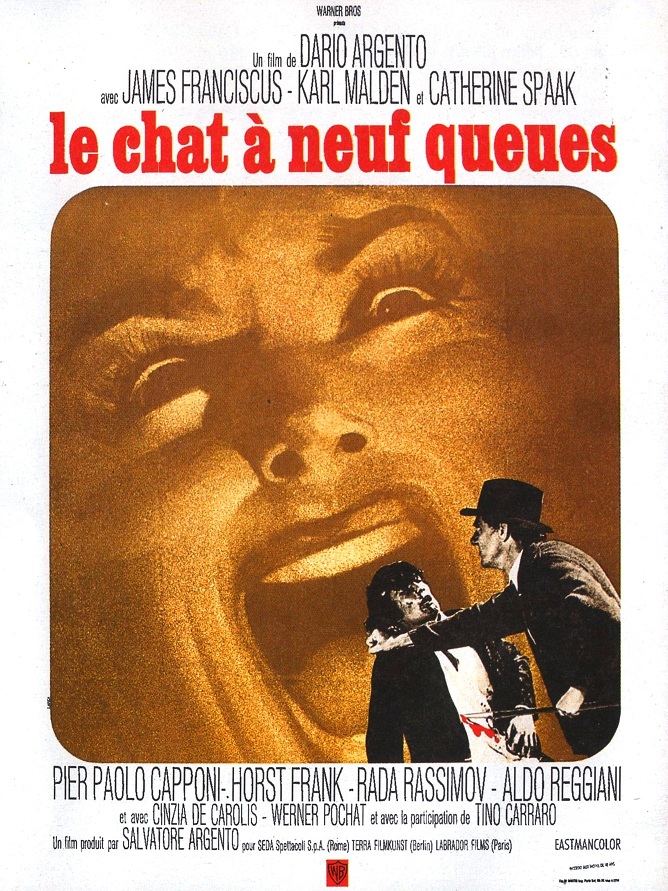 This is where The Cat o’ Nine Tails falls, as the first-person killer cam, the first-person falling-from-heights cam and the jump cuts were all infinitely more effective in The Bird with the Crystal Plumage. This isn’t to say that everything is a wash here though. There’s a lot of scenes and moments that play out rather well. There is an especially tense scene where Karl Malden and James Franciscus enter a crypt to search a recently deceased lead. With some editing to bring these quality scenes closer together, this may have been a better picture. The one thing that does work completely in this one are the death scenes. Each and every one is brutal, hard-to-watch and skillfully shot. As morbid and sadistic as it may sound, they are the highlight of the film with the first death and the final death being the most impactful. I do have to say that the big reveal at the end was a bit of a WTF moment for me as I had long since lost track of all the supporting characters, but regardless of this, the last ten or fifteen minutes are incredibly strong.

Karl Malden does well in one of the hardest roles in film to pull off well, the blind guy. James Franciscus is also good as his partner in solving crime. As this is a 70s Italian film, it’s all dubbed per the shooting style of the day, but to my ears the dubbing was done really well. I generally wouldn’t even comment on this fact, but after quickly looking at Leonard Maltin’s book, I felt that I needed to put my two cents in. For the record, Maltin gave this the coveted BOMB rating and noted how the dubbing was especially terrible.

Argento once again goes with a Hitchcock-styled film for his sophomore feature but with decidedly less than Hitchcock results. Despite its many flaws, I still liked The Cat o’ Nine Tails. The scenes that impress are damn good and it’s a shame that it gets so bogged down by the weight of the many characters it unsuccessfully juggles. Genre fans will definitely want to check it out for the death scenes though, as they are excellent. They aren’t very bloody, but they still manage to be incredibly brutal. Cautiously recommended to fans of Argento and the genre, all others will most likely be unimpressed and bored.

The horror train keeps on rollin’ tomorrow as Uncle Jasper chimes in with a review of Santo in the Wax Museum!