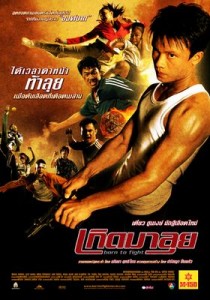 Expectations: High. I saw the trailer and expected this to be fantastic.

Wow! If you like high-octane action to the X-TREME! then I’ve got a movie for you. Born to Fight is directed by Panna Rittikrai who was Tony Jaa’s mentor and is responsible for the martial arts and action choreography for Ong Bak and The Protector, among others. He leads the Muay Thai Stunt team and if you haven’t seen them in action, you are seriously missing out on the most exciting, ridiculous and horribly painful stunts ever to grace the screen. The level of “Oh shit!” is off the chart, and I am instantly brought back to the feeling of when I started watching Hong Kong movies.

Dan Chupong, member of Muay Thai Stunt, gets his first starring role and does very well. The film opens with Chupong and his buddy/mentor cop raiding the dastardly General Yang’s hideout. It quickly escalates into an extended action sequence involving guns, martial arts and some amazing stunt falls from moving semi-trucks. On one of the falls in particular, if the stuntman had landed maybe one or two inches differently his head would have been fatally crushed like a grape. It’s crazy stunts like this that let you know how committed the Muay Thai Stunt team is and just how far they’ll go to film a quality looking stunt.

So for reasons I won’t go into, Chupong finds himself going on a humanitarian mission to a small village with the Thai National Gymnastics squad. The village soon finds itself under siege from a team of guerrilla mercenaries and the athletes become a seven samurai of sorts. The siege part of the film can get a bit tedious and slow but about halfway through the movie, the ass-kicking action begins and virtually never lets up for the rest of the film. I’m not exaggerating here, it’s probably forty minutes of sustained action and it’s incredibly entertaining. All the action scenes are cut to the pumping rhythms of techno music, so if you’re not a fan consider yourself warned. The music works for this movie, but I couldn’t help but think of a VHS tape a friend made back in the day, called Techno Jackie, that spliced together the best Jackie Chan fight scenes with the hippest house beats.

The focus here is on action and stunts, not martial arts though. If you go in expecting Chupong to be the next Tony Jaa or Jet Li you will be disappointed. There are some fights interspersed throughout, but given that the major action consists of an entire village taking on a band of mercenaries, it’s a lot less focused on any one person than a traditional martial arts action film. I don’t think I’ve ever seen a film quite this and I thoroughly enjoyed it. One scene in particular involving a rocket launcher had me hitting the rewind button over and over again. Even without a direct focus on martial arts, there are still tons of slow-motion, bone-crushing kicks to the head and that always bring a smile to a fight fan’s face.

Born to Fight is a fantastic addition to the Thai action film roster that continues to impress. Watch it, enjoy it, and spread the word. Born to Fight is very reminiscent of Hong Kong films prior to the introduction of the CG effects that pretty much destroyed the charm of the Hong Kong film industry. It excites me to no end, knowing that honest, martial arts filmmaking is alive and well.