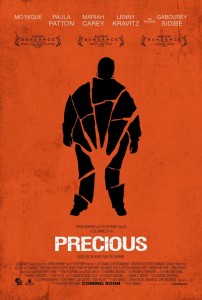 Precious tells the story of a 16-year-old girl, pregnant with her second child, and her day-to-day struggles to overcome her abusive mother and her second grade reading and writing levels. The film is an incredibly emotional tale and it is hard to watch at times. Gabourey Sidibe is fantastic as Precious. She really hits the early scenes when Precious is illiterate and then skillfully handles the character’s transformation into a strong woman, focused on her education and her children. For me, this is the stand-out debut performance of 2009 and I hope that she is able to get some more roles that can really showcase her talent and range. Mo’Nique is also fantastic as Precious’s mother. Her Oscar was very well deserved.

From a filmmaking standpoint the film is a bit uneven. There are moments when I felt that director Lee Daniels knew exactly what he wanted to do and he executed it well. For almost every time I thought that though, there would be another time when I felt that he was struggling to figure out exactly how to handle something. I mostly had problems with some of the scene transitions. There were a number of fade-to-black moments after scenes that didn’t make sense and only served to drain the momentum of the film. There’s also a lot of handheld work and on-the-fly snap zooming that really serves no purpose. Handhold it if you want, but we don’t need to see you zoom in, then decide that you need to zoom in more, then to finally zoom back to where we started, all within the space of three seconds.

There are a number of fantasy scenes in the film that I had no idea were in it. I liked them a lot and I felt that Daniel’s handled these transitions very well. I don’t know about being Oscar worthy for his work here, but there is definitely a ton of potential for him to make a name for himself. As much as some of these little things bothered me, overall I thought the film was a huge success. He was able to get fantastic performances from everyone involved, so he’s definitely doing something right. His use of music in the film is also very well done. The emotional scenes didn’t have touching piano music, much to my satisfaction. Check out my review of An Education for some back story on my hatred of overused, touching piano music.

Precious’s story is emotionally draining and not a movie you would want to be re-watching over and over. The film is pretty original though, even with the classroom scenes echoing any other inner-city classroom scene you ever saw. Overall, I think it works and it’s a film that deserved the attention it was given.