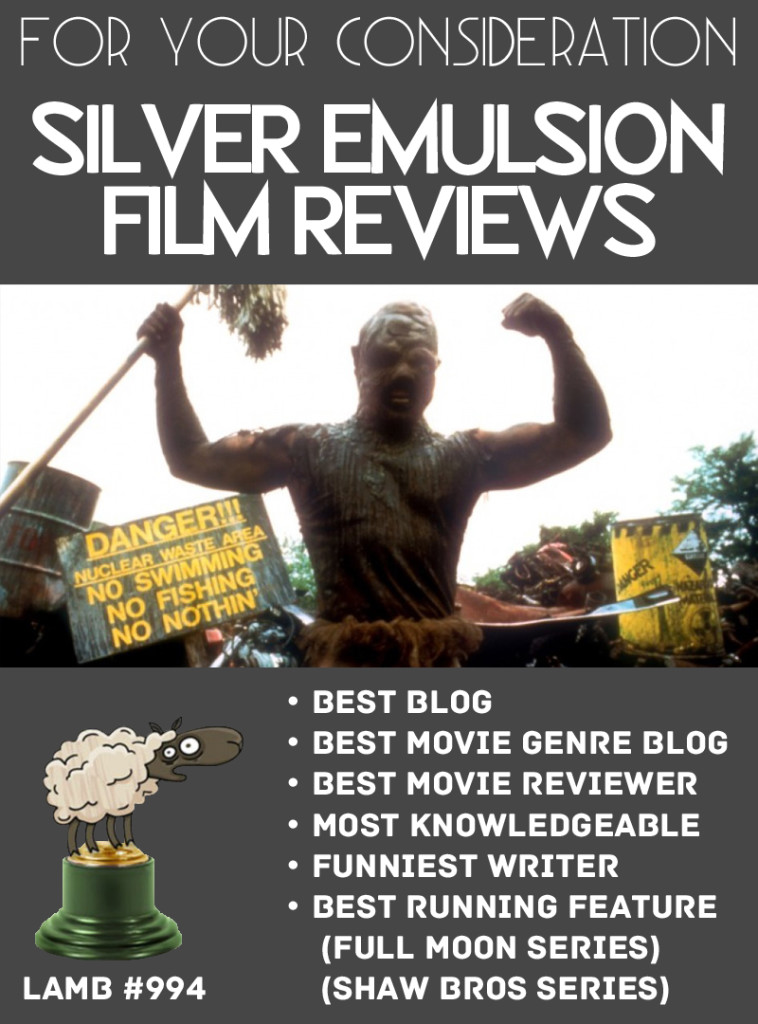 “What the fuck are the Lammys?”

For those outside of the movie blogging world, the Lammys are the annual blog awards put on by The Large Association of Movie Blogs AKA The LAMB, so basically the Oscars for movie blogs. And the nomination period has begun! Unfortunately you must be a LAMB to vote, so my legions of undead readers will have to vote me to success someplace else. But if you’re a member, then do I have a pitch for you!

Despite being around and hammering out something like 400 reviews over the past two years, I have a very small following because of my inability to network and self-promote. And if you nominate Silver Emulsion in any of the categories below, I firmly promise to continue the trend of ineffectual marketing, as well as fully providing the category-specific rewards I mention in the pitches below. What can I say, I’ve been inspired by all the Kickstarter posts I’ve read lately. So without further ado, here’s my best foot forward and all that.

Best Blog
I’ll always have the best blog in my heart, but unfortunately you can’t vote for yourself. This is where you come in. In honor of my underdog spirit, if I’m nominated for Best Blog I’ll review 1985’s GYMKATA, 1989’s BEST OF THE BEST, & the entire KARATE KID series.

Best Design
I don’t think I really have a chance in hell of being nominated for this category. That being said, if I get nominated I’ll review 1958’s VERTIGO in honor of Saul Bass’s great design work.

Best Community Builder/Networking LAMB
Hahahahaha. This would be the place to enter me as an ironic vote. C’mon, you know you want to. Undermine the system! If I’m nominated I’ll fight the power with a review of 1982’s GANDHI.

Most Prolific
Admittedly, a couple hundred posts a year is nothing within this game; lots of bloggers bust out 400+ posts a year. But 200 reviews in one year is nothing to turn your mouse away from. If I’m nominated I’ll review one of prolific director Takashi Miike’s rare early films: 1992’s wrestling exploitation movie A HUMAN MURDER WEAPON.

Best Blog-a-thon/Meme
Hmmm. I got nothing. I neither created or participated in anything that would fit under this category, so this is the one where I’m really gonna need your help. If I get the nod, I’ll review the entire NIGHTMARE ON ELM STREET series.

Funniest Writer
If you’ve laughed at all while reading this, then you know where you must cast your vote. If you need further convincing, perhaps this or this will help. If I get your vote, I’ll resurrect my old idea of reviewing the WEEKEND AT BERNIE’S films, and posting them on the weekend in a series entitled THE WEEKEND AT BERNIE’S. You know you want that.

Brainiac Award
I have my moments, but in my mind I still remain mostly in the shadow of better film critics. But if I get your nomination, I’ll jump headlong into the films of Ingmar Bergman, perhaps WILD STRAWBERRIES and THE VIRGIN SPRING, and try to deliver something insightful.

Best Running Feature
I’ve plugged away at a pace of one review a week on my quest to review every Full Moon feature. If that’s not exciting enough for you, how about a series where I watch all the Shaw Brothers martial arts films in chronological order of release? If you nominate me, in addition to continuing the current series’, I’ll start up my long-awaited and much rumored chronological jaunt through the films of Jean Claude Van-Damme!

Best Ratings System
I use the classic 4 star system, with an extra four stars for B-movies. This allows you to see if a B-Movie is shitty and awesome, or just shitty and boring, easily and quickly. If I get the nomination, I’ll use this amazing, iconoclast rating system to review revered auteur Terrence Malick’s first film BADLANDS, and Troma’s 1987 cult hit REDNECK ZOMBIES.

Best Horror/Sci-Fi Blog
I’m already holding down the fort on horror, but sci-fi could definitely use a shot in the arm. If you get me on the ballot, I’ll review 1982’s BLADE RUNNER and 1981’s SCANNERS.

Best Classic Film Blog
Like sci-fi, I need to beef up the classic film content on the site. That being said, my ongoing series of Sam Fuller film reviews is fun, and most of the Shaw Brothers films would qualify as classics. If I get nominated, I’ll review CASABLANCA, LAWRENCE OF ARABIA and ON THE WATERFRONT.

Best Festival/Awards Coverage
I got nothing. If you nominate me, it’ll because you want me to review the 1993 nominees for Worst Picture at the Razzies: INDECENT PROPOSAL, BODY OF EVIDENCE, CLIFFHANGER, LAST ACTION HERO, & SLIVER.

Best New LAMB
I am eligible for Best New LAMB, and I’ve done nothing but be awesome all year long, so I totally deserve it. If you nominate me, I’ll make good on my site’s tagline and actually review 1941’s CITIZEN KANE and 1984’s THE TOXIC AVENGER.

Best Podcast
I don’t have a podcast, but again I ask you to subvert the system and vote for me. Imagine all that you’ve read, but spoken and in your ear! It would be amazing, let me tell you. In honor of podcasts ruining people’s hearing around the world, if I’m nominated I’ll review 1984’s THIS IS SPINAL TAP & 1979’s ROCK AND ROLL HIGH SCHOOL.

Best Movie Reviewer
I do my best reviewing the movies I do here, and if it’s worthy of a vote, I humbly thank you. And what might I thank you with? Reviews of 2004’s SUBURBAN SASQUATCH, 1996’s DUNSTON CHECKS IN, and the entire PLANET OF THE APES series, that’s what! I’m goin’ ape for your votes!

Go here to vote if you’re a LAMB!