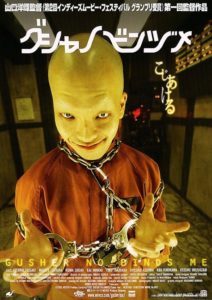 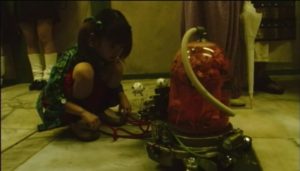 The story centers on a young woman named Luchino Fujisaki played by… Luchino Fujisaki. I wish I knew the explanation behind that decision; it’s not like any of the other actors had the same name as their characters, but sadly that will have to remain one of life’s little mysteries. Luchino is a telepathic recovering drug user (though I get the feeling that her drug use was more medicinal than recreational) who seems to be replacing her former addiction with a new addiction to cigarettes, which are also illegal here.

The telepathy angle is rather subtle at first, making you work to figure out what’s going on. I like this method of revealing information, and it’s used well here. The telepathy angle also allows some really strange visuals as Luchino dives into people’s minds, which I also loved. And since there is very little CG outside of the opening credits, it all looks really great. The odd setting combined with the hallucinatory imagery makes for a fantastic experience that I wasn’t expecting at all. 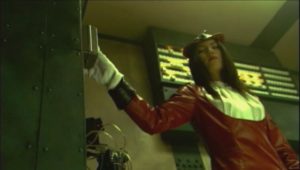 One of Luchino’s discarded cigarette butts causes an explosion that jams the elevator Luchino is riding in, which is also transporting two serial killers on their way to be executed. The prisoners use the opportunity to escape and kill the guard in charge of them, and thus starts the fun as the innocent commuters are stuck on a broken elevator with no escape from the lunatics trapped with them. This is where the film could have gone horribly wrong. If the whole movie had just been torture porn as the criminals had their way with the bystanders, it would have been pretty disappointing. Instead, the prisoners are dealt with in relatively short order, and the film moves to the psychological toll on the survivors. After all, they’re still stuck on an elevator, and the actions they took to survive have bred new distrust among them.

This is where Luchino’s telepathy comes to the fore as she dives into the minds of her fellow passengers to see their pasts and what motivates them, while also showing us glimpses of her own troubled past. There is some awkwardness with this part of the film, though, as Luchino’s telepathy isn’t the focus up until this point. I think the film would have been a bit more cohesive had they spread that out more smoothly across the story rather than jam it all in right there. It makes the movie feel a bit more like a bait and switch as it suddenly changes direction halfway through. But really that’s a pretty minor complaint in a film with as much creativity as this one. 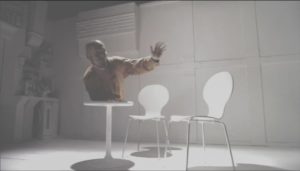 It’s all put together very well. The acting is good, establishing a diverse cast that feel like unique individuals. The story is varied and elaborate, something you would think is very difficult to do when it mostly takes place in not just one set, but in just one small room. On top of that, the set design and special effects are fantastic, which is very important when you’re stuck in that room for the whole film and have to see the same things constantly. I was especially fond of the bizarre, overwrought elevator controls, full of mysterious levers and switches that needed a trained technician just to operate.

So I didn’t get my wish for a campy schlock-filled comedy; I got something better. An intelligent and creative psychological sci-fi horror film with a strange visual style. And hey, maybe if you’re the type who does get goosebumps from horror thrills, then the claustrophobic environment and those serial killers on the loose just might give you some scares, too.