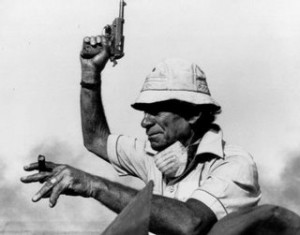 Samuel Fuller is one of the greatest directors of all time, but sadly his name is not generally spoken in the same breath as auteurs such as Hitchcock, Kubrick or Truffaut. His films showcase realism and social awareness years ahead of their time, informed by his service with the U.S. Army during World War II. The only combat veteran to become a Hollywood director, Fuller’s experiences on the front line shaped his life and the films he made. His career as a journalist played just as big of a role, contributing a to-the-point, direct nature to his work that is unlike any other director. His films are largely forgotten, but they rank among some of the best cinema that has to offer. Martin Scorsese once said, “If you don’t like the films of Sam Fuller, then you just don’t like cinema.” Truer words have never been spoken. Thanks to the work of people at Criterion, the Warner Archive and Sony, a number of his previously unavailable films are now within reach.

This page will serve as a hub for all of my reviews of his films.

Now that I’ve completed reviewing all of Fuller’s directorial films, I’ve worked up a list of my 10 favorites!

Works written by Fuller
(or derived from his original scripts,
more info will be in the reviews)

8 thoughts on “The Films of Samuel Fuller”