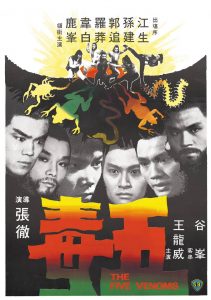 The story bypasses having a traditional protagonist and his struggles with a villain. Yang De is initially presented as such, but he’s a bystander for much of the film, in awe of the legendary Five Venoms as much as the audience. Everyone is kind of a villain, too, some more villainous than others. This isn’t clear until later in the film, adding to the tension and the mystery of the atypical, but relentlessly engaging story. Observing the demise of the Five Venoms House gives us a glimpse into the danger and ferocious treachery of the martial world, and in that way it’s like a Chang Cheh take on a Chor Yuen-style story. The Five Venoms is a wuxia hybrid that keeps the action relatively grounded, carrying with it Chang’s much heavier focus on making the action standout.

The same choreography team who worked together on The Brave Archer 2 — Robert Tai Chi-Hsien, Leung Ting (the final student of Ip Man!) and Lu Feng — work some wonderful magic in The Five Venoms. The fights are fantastic, both for the time and for all time, as they blend rapidity, complexity and athleticism with each fighter’s unique style. Lu Feng stood out the most to me, with an astonishing quickness. Lu was in a few smaller roles before this, but The Five Venoms fully unleashed him. His talent is immense, and this little taste whets my appetite for the rest of the Venom Mob era. While not as electric as Lu Feng, The Five Venoms gives the first major spotlight to Chiang Sheng and Wai Pak, as well.

Chang Cheh isn’t kind about these years in his memoir, but I feel like that’s more representative of his mindset at the time than the actual quality of the films. The Five Venoms was his highest grossing film of the year, and from what I researched he only had one later film outgross it: 1981’s The Brave Archer Part III. His films would often do over a million HK dollars, once the mark of a film’s hit status, but the market had changed considerably since he set this standard in 1967 with The One-Armed Swordsman. For instance, The Five Venoms ranked #14 in 1978 with about HK$1.8 million, while The Brave Archer Part III ranked #48 with almost HK$1.9 million. The #1 film both years was a Hui Brothers film, with 1981’s Security Unlimited making a whopping HK$10 million more than 1978’s The Contract. The Hong Kong box office was exploding, and Chang, who was once its greatest director, was struggling for relevance amidst personal defeat and changing audience expectations. It’s no wonder he didn’t look back fondly on these waning years of his career.

The Five Venoms is a fantastic film for fans and newcomers alike. If you’ve never seen it, or if you just haven’t seen it in 20-some years like me, it’s a must see.

Next up in this chronological journey through the Shaw Brothers Martial Arts catalog is another banger I’ve seen before: Sun Chung’s The Avenging Eagle! See ya then (hopefully soon)!