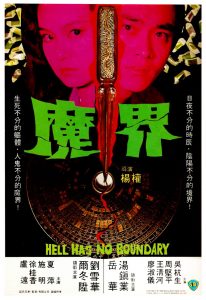 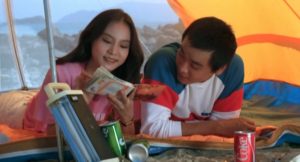 Even typing out this description, I like Hell Has No Boundary better than when I was watching it. Distilling the story down to its base elements brings some order to the film, an order that is rarely felt in the actual movie. Looking at my notes solidifies this feeling further, as I am reminded of things that seemed to lead somewhere but were actually just a step between unconnected events. It makes for a disjointed film, but to simply say that sounds like I’m disregarding it. Hell Has No Boundary really is an entertaining movie, but I was surprised it was such an unfocused B-Movie.

Hell Has No Boundary was released in 1982, the year after Kuei Chih-Hung’s masterpiece Bewitched was the highest grossing Shaw film of the year. There is a definite influence in Hell Has No Boundary from the black magic movies of Kuei and Ho Meng-Hua, but I wouldn’t call it a black magic movie itself. It’s not without some elements, though, such as when a Taoist practitioner attempts an exorcism of May that culminates in a light, bite-sized version of the magic battles of Bewitched. It’s a fun scene on its own, but neither the special FX work or the direction work enough wonders to make us believe in the magic of it all. Like the rest of the movie, it could be so much more. 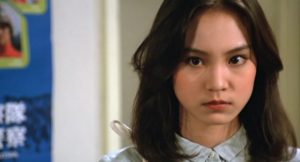 Beyond this, I don’t have a lot of thoughts about Hell Has No Boundary. It’s a fun watch, but it’s too all over the place to really land in any significant way. Leanne Lau Suet-Wah turns in a great performance as the possessed May, though, while Derek Yee and Yueh Hua fill key secondary roles with their traditional solid delivery. I have a feeling B-Movie fans will get a lot more out of this than anyone else, just for the “Death by toilet paper” scene alone. The cool thing is that this is merely one moment in a film riddled with weirdo fun. Go in with the right frame of mind, free from expectations, and I think you’ll enjoy it.

Next up, we return to the regularly scheduled chronological journey through the Shaw Brothers Martial Arts catalog with the first film of 1978: Flying Guillotine Part II! I’m gonna take a couple of weeks off before then, though. See ya then!