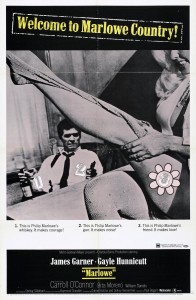 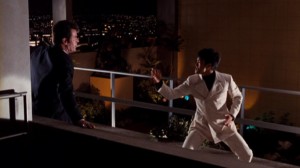 This music is the first indication that the film’s tone will be different than the novel, opening with a fucking horrible, upbeat theme song called The Little Sister over the opening credits. I should have known to throw out all expectations right there! But I gave the film the benefit of the doubt considering that they were attempting to update the story to the then-current year of 1969. As much as I tried, though, this upbeat, cool jazz score casts a light tone over the film, while the plot deals with a missing brother, blackmail and a few ice pick murders. Not exactly “light” material, but yet the music and some of the dialogue suggest that the film is supposed to be just as much of a comedy as it is a mystery drama. Hell, they even had Marlowe fight Bruce Lee on a rooftop balcony, with Marlowe outsmarting him by simply moving aside as Bruce jump kicks, falling to his death on the street below. Funny how Bruce can take out a room of trained martial artists without any issue in a Hong Kong film, while in an American movie he’s literally beaten by a dude just getting out of the way. Sigh. 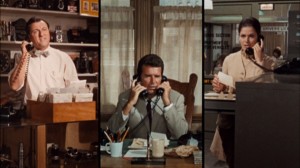 The other really annoying aspect of this adaptation is that along with the corniness, they’ve also added a healthy amount of trashiness. For example, let’s look at one of the final scenes in both the book and the movie. In the book, it’s a fairly somber encounter in an apartment with Marlowe revealing that he knows the truth of what really happened to another character. On his way out he passes another character, one that he probably should stop, but he doesn’t. He just calls the police. In the movie version, the encounter happens at a burlesque bar, and Marlowe is confronting the other character from stage right while she’s performing a striptease for a cat-calling audience. After his talk doesn’t go too well, he starts calling the police, and while he’s on the phone the other character comes in and does something on-screen that happens off-screen in the book. It doesn’t sound as trashy as it is just typing it out in vague terms, but it seriously some eye-roll inducing stuff that completely obliterates the subtly and poignancy of the novel. 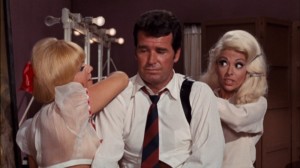 What really makes Marlowe frustrating is that there’s a good half-hour or so at the beginning that really makes you think they’re going to pull off a worthwhile adaptation. The tone is serious, and it’s engaging in a similar way to the source material. But without Marlowe’s dark soul, we’re left with James Garner doing something of a city-street version of James Bond, always the ladies man and so cool that he has his own swanky jazz whenever he wipes a scene down for prints. I wanted to like it, I really did, but I really can’t imagine any fan of the novel being pleased with his overblown, trashy version of the story. And it’s oddly misplaced trash, too, as much of the novel’s dialogue has been whitewashed of its edge and its profanity, despite the film releasing 20 years after the book. If you never read the book, you have a far higher chance of enjoying the film, but if you want to understand why Marlowe is one of the greatest literary detectives of all time just stick with the books.

Marlowe is available via the Warner Archive if you’re interested in checking it out.