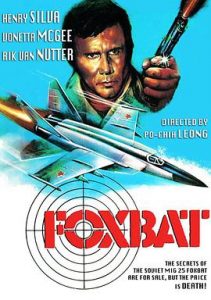 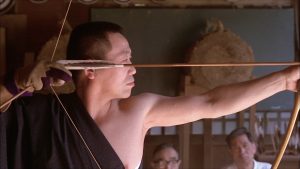 This unfortunate ingestion happens at about the halfway mark of the movie, and it’s also the hinge between the two halves. The first half is more talky, setting up all the factions and drawing them together. It’s a little slow and without urgency during the espionage drama, but there is action sprinkled here and there. When Cheung eats the candy, the entire film shifts into a desperate chase to capture him and remove the film from his stomach. Long chase scenes through the Hong Kong streets kept me riveted, and when night fell and the hunt moved to foot, the tension only increased as Cheung made his way through a crowded street market (where Samuel Hui’s theme song to 1976’s smash-hit The Private Eyes can be heard on a radio). The second half effortlessly delivers its action alongside effective drama and comedy, and I imagine anyone who loves multi-tonal films will enjoy this one, as well. I re-watched the film a couple of days later with Po-Chih Leong’s commentary, and I should note that the entire film played better on a second go-round, with lots of intricacies and beats that I previously missed revealing themselves during the opening half. 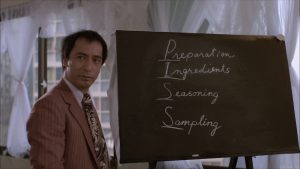 Foxbat is a Hong Kong film, but it rarely feels anything like the usual cinema of the region. I’m sure this helped it to reach the Top 10 at the Hong Kong box office, outperforming every Shaw Brothers film except Executioners from Shaolin and Clans of Intrigue. Only within the film’s car-based action scenes is the Hong Kong production evident, as only in Hong Kong can you stage a chase scene involving a double-decker bus and an ambulance on busy streets without any sort of permits. Foxbat also purposely avoids kung fu fights to further distance itself from traditional Hong Kong films, lending the film a more international feel. This also delivers the added benefit of not having to worry about English-speaking actors performing ugly martial arts! 😀 There’s a conscious effort to always keep the film exciting and fresh, so each scene of action always offers something different from the last. A ludicrous fight between Henry Silva and a sumo wrestler recalls the bathhouse setting of Thunderball, and truly must be seen to be believed. Speaking of Thunderball, director Terence Young worked as a script consultant on Foxbat, and some for reason has since been erroneously referred to as the film’s co-director. 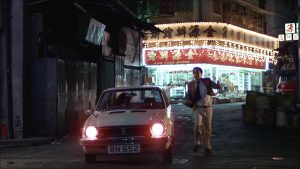 On his commentary, Po-Chih Leong mentions that the budget for Foxbat was very high for the time in Hong Kong, roughly $3 million dollars. This, coupled with the location shooting really makes Foxbat stand out from the crowd. I’m not sure that the film will play as well to American audiences just looking for an espionage thriller, but within the context of 1977 Hong Kong, it’s quite the achievement. I wonder if Sammo Hung or Jackie Chan are fans of this film, because the basic setup of Mr. Nice Guy, involving a Chinese cook who’s in over his head and being chased, is similar… not to mention that we meet both Jackie’s character and Cheung in Foxbat while they demonstrator the technique of twirling dough to make noodles. In any case, Foxbat should be a film on Hong Kong fans’ radar, specifically those interested in the Hong Kong New Wave or Po-Chih Leong’s filmography. It also features Phillip Chan and Melvin Wong in very early roles!

Foxbat is on Blu-ray from Code Red Releasing, available at the fine independent retailers DiabolikDVD or Grindhouse Video.

Next up in this chronological journey through the Shaw Brothers Martial Arts catalog is Chor Yuen’s fifth and final 1977 film, Pursuit of Vengeance! See ya then!