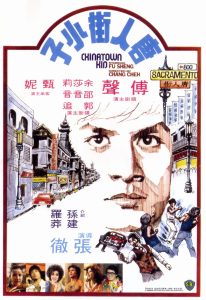 As you can probably tell, the two characters are very complimentary in their opposing qualities, so the film has a nice moral quality that delivers a message while providing entertainment. I know this sort of thing can come off heavy-handed, and perhaps it does here to some, but I find this to be one of the best qualities of the film. Together the characters are unstoppable, remaining accountable to one another and driving each other’s work ethic, while divided they are destined to follow paths that indulge their worst qualities. It ties Chinatown Kid back to the earlier Chang Cheh films that dealt with delinquent youth, but Sun Chien’s character offers more hope than is generally seen in those films.

In the Celestial cut, the characters are virtually equal co-leads, while the longer cut focuses much more heavily on Fu Sheng’s character and his descent into crime. As such, the moral underpinning the story is not nearly as strong in the longer version, especially since the short epilogue with Yang’s father is not present. This makes it hard for me to say that either of the versions is superior to the other, as I prefer the Celestial cut’s moral strength, and the extended plot & action of the longer cut. I should also note that the longer cut is dubbed in English and doesn’t look especially great, so that’s probably a factor, as well. Perhaps a different Frankenstein edit that uses the Celestial remaster as its primary source is in order. 🙂

Regardless of my personal leanings, though, it’s easy to see why fans were so upset by Celestial’s release. Entire sections of plot are removed that better explain everything involved with Fu Sheng’s exodus from Hong Kong, as well as his struggle with the White Dragons in Chinatown. Perhaps most notably the characters played by Kara Hui and Tsai Hung are completely removed. Hui’s character is minor, but the events she’s involved with make the story progress much more naturally. Tsai Hung is more integral to the later part of the movie, and on top of that he’s ridiculously badass. Nearly every time he shows up a dope funk jam plays, perfectly complimenting his big shades, moptop and pork-chop sideburns. His character is so firmly rooted in the ’70s, that even if the footage existed I doubt they could remaster him. 😀

Removing Tsai’s character also required a couple of reshot scenes with Phillip Kwok to readjust the plot to make sense. Within these scenes (and similar ones with Johnny Wang Lung-Wei earlier) comes the understanding of what happened with Celestial’s alternate version. The scenes were clearly shot to allow for the edit to make sense, which means it was consciously done to create a different, shorter cut of the movie… in 1977. I don’t want to explain it at length (read about it in the wonderful write-up by Fu Sheng superfan and biographer Teako here), but apparently this was a regular occurrence for many Shaw Brothers films, and unfortunately it’s the only edit of Chinatown that remains in the Shaw vaults.

In terms of action, choreographers Lee Ka-Ting & Robert Tai Chi-Hsien do a solid job. Nothing close to the level of quality in the work of Lau Kar-Leung or Sammo Hung, but definitely solid and highly entertaining. As much as I enjoy the Celestial cut and its brisk pace, I always thought the film could use more action. To my surprise, there is quite a bit of action edited out of that version, some of it to accommodate the plot changes while other moments were clearly cut for violence. I don’t know which market Celestial’s version was originally edited for, but apparently it’s somewhere that wants less complicated plots and a limited amount of brutality. This extends to the ending, as well, as the Celestial features an upbeat conclusion, while the longer cut has a more traditional Chang Cheh-style ending.

The Celestial remasters are one of the best things to ever happen to Hong Kong film preservation, and while in this case they present an alternate, arguably inferior version of the movie, by no means does this mean Chinatown Kid should be overlooked. Sun Chien is wonderful in his debut role, showcasing a great acting ability alongside his athleticism. Lo Meng is also featured in his first big role, and he equally shines. Additionally, Chang Cheh shoots the film beautifully, capturing some of his best framed images across his vast filmography. Chinatown Kid is a great movie that should be seen by all Shaw Brothers fans, especially Venom Mob fans wishing to see the first movie featuring all five venoms.

For an alternate, frustrated take on the Celestial edit, check out Uncle Jasper’s review from the early days of Silver Emulsion.

Next up in this chronological journey through the Shaw Brothers Martial Arts catalog is another non-Shaw box office hit! It’s Po-Chih Leong’s follow-up to Jumping Ash… Foxbat! See ya then!