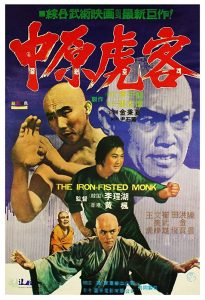 Surprisingly though, Chong’s revenge is not what The Iron-Fisted Monk focuses on. Instead, his revenge is merely a catalyst for his training and exodus from Shaolin. The true story of the film involves Chong being framed for murder when he attempts to help people in need like San Te did for him. While Chong beats up a Manchu thug, an enraged man, Liang (Lo Hoi-Pang), who just found out his sister was raped by a group of Manchus, stabs the defenseless man to death. The murdered Manchu’s friends run to tell their rape-fiend boss (Fung Hak-On), but they only saw Chong and thus he is now being hunted for murder. Chong may have thought he was ready to take his Shaolin skills on the road, but he isn’t nearly as polished as San Te. Following up on Chong’s revenge isn’t necessary for the film, but I do think that the shifting focus without resolution is something that hinders the film from being as dramatically successful as it could be.

In spite of the rape and murder subject matter, The Iron-Fisted Monk is partly a comedy. Sammo has apparently claimed that the film was the first kung-fu comedy, and while it did release before Jackie’s collaborations with Yuen Woo-Ping, Lau Kar-Leung’s The Spiritual Boxer featured a similar mix of genres a full two years prior to Sammo’s film. The Iron-Fisted Monk might not be the first, but it is a strong link between Lau’s early work and the Jackie Chan/Yuen Woo-Ping blockbusters. But beyond this, a good portion of Sammo’s films are attempts at joining serious drama with comedy and action, with each film leaning more into one of the components. For instance, Heart of Dragon heavily favors drama, while Enter the Fat Dragon leans towards comedy, etc. The Iron-Fisted Monk has a fairly equal balance, but the elements aren’t as seamlessly integrated as they are in his later films. That is to be expected, of course; his instincts would sharpen and mature over time, but his talent and wit are on full display here in his debut. The gap between lighthearted fun and rough rape scenes — the film was retroactively given a Category III rating — is probably too large for most Western viewers, but if you’re willing to go for the ride, it does deliver well on all fronts.

As a director, Sammo’s films generally follow a framework of moderate action in the beginning, a lull during the mid-section where the drama intensifies, and then an action finale that is an all-out assault of action brilliance. The Iron-Fisted Monk is no different, and it delivers fantastic action rivaling just about everything else that came out at this time in Hong Kong. There’s a reason this film was a huge hit, reaching #6 at the year’s local box office, and it’s because Sammo’s choreography cooks. Right from the beginning, the fights are top-notch work that are nearly up to par with Lau Kar-Leung’s transcendent choreography. In the finale, though, Sammo goes so hard that he quite possibly delivers the best choreography that 1977 has to offer. I’d have to watch the fights back-to-back with some other great fights to decide, but regardless of ranking the work here is nothing short of amazing. That being said, I would say that it’s all a little too bland to be memorable and stand out from the pack. This is really the only thing holding the fights back, though, otherwise these are some of the best fights of 1977. The choreography marries the playfulness of Snake in the Eagle’s Shadow and Drunken Master with the staunch precision of Lau Kar-Leung’s best work, all about five months before the first of those films was released. As I mentioned before, though, I don’t think the fights will play as well to someone watching it randomly, because it really feels like a lesser version of later greats without the context.

The Iron-Fisted Monk is a great debut from one of my favorite Hong Kong directors. Seeing it in context with its contemporaries helped me to appreciate it much more, and I hope you like it, too!

Next up in this chronological journey through the Shaw Brothers Martial Arts catalog is Pao Hsueh-Li’s The Battle Wizard! With a title like that it has to be great, right? See ya then!