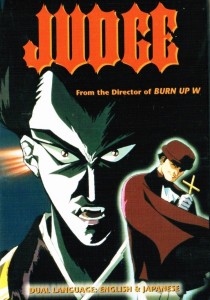 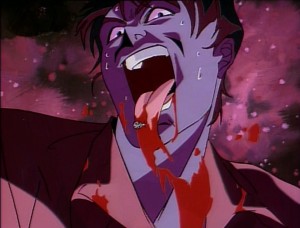 Though I was right that Ohma’s incompetent demeanor is just a facade. But he’s not just some guy that knows more than he lets on. He’s actually a judge of darkness. When someone is murdered and doesn’t get justice, Ohma uses dark magic to track down the murderer and gives them the punishment they deserve. So the film is a dark magic revenge story instead of a man on the run story.

This little twist probably gave me a higher enjoyment from the film than it deserved, but it’s those times when a film surprises you that are the most enjoyable, so all I can say is that I had fun with it. That may have been countered by the scratched-up DVD Netflix sent me, though. The damn thing kept skipping around and crashing every DVD player I have set up. It even skipped the final confrontation entirely, jumping me to the conclusion without knowing what happened, forcing me to rewind and piece together what I could from the jittery disc. This obviously doesn’t make the film itself any worse, but it did color my experience of it. 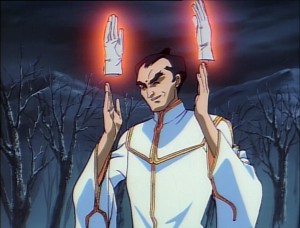 I wonder if I would have enjoyed the end of the film more had I been able to watch it properly, but for the most part I think not. The more I think about it, the more I realize that the end stumbled into a very awkwardly concluded battle. That final confrontation veers away from the unstoppable dark magic, and swings into a bizarre legal argument in front of the gods. You see, the plot takes another twist half way through the film when the lawyer shows up. Now Ohma has to get through the magical defense attorney in order to get revenge for the deceased.

This actually worked pretty well at first, as the battle was less one of legal debate and more of a showdown between two dark wizards hurling demons and explosions at each other. This battle didn’t have the creativity or unique tone that the best dark magic films do, but it did have a pair of flying magic gloves that were pretty damn awesome. The film manages to pull off a pretty exciting showdown in the mountains between the two wizards, and it’s made all the weirder by the legal terminology that they throw around with their spells. 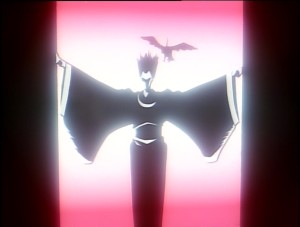 Where the film started to fall apart was immediately after this battle. That’s when they get summoned into the spirit world to argue their cases before a council of gods who will decide the victor. It’s kinda weak on its own, and the conclusion feels really tacked on. It’s as if the director wanted to just get this boring legal battle over with even more than I did, and he just threw on a cheap and convenient ending to wrap it all up.

Another problem the film had was a lack of focus. It spends so much time setting up Ohma and showing what he does that the film is halfway done by the time he gets to the real villain (who has some of the weirdest looking eyes I’ve ever seen in an anime). It left me feeling a bit lost as to where the film was going and what its point was, but it never managed to make Ohma’s character or his relationship with his girlfriend feel anything more than superficial.

Certainly the film could have been a lot better, but in the end I had enough fun to justify watching it, even with that damn scratched-up disc. The visuals were pretty cool, the plot was twisty enough to keep me interested, and some of the action was fairly memorable. So give it a whirl if black magic is your thing. It just might work for you.

No trailer, I’m afraid, but I did find this odd little death scene.