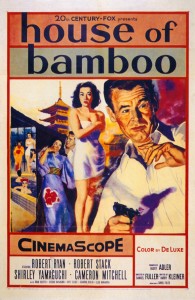 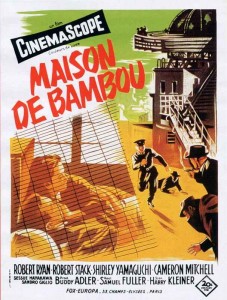 The film opens with a daring train robbery against the backdrop of Mt. Fuji. A group of masked men move quickly and with crackerjack timing to pull off the heist, but in the last moments, one of them is forced to shoot and kill an Army soldier who was along for the ride to help protect the load. The Army, now involved, begins the hunt for the men who did it. This is overly simplified, and probably leaning too heavy on the heist/mystery aspects of the script, but it is an apt description for the story’s kernel.

What really bogs down House of Bamboo is the middle section where Robert Stack and Susan Yamaguchi have a blossoming romance. It not only derails the awesome heist storyline, it is completely unbelievable. Yamaguchi’s character is so weak and desperate that she literally goes from being slapped in the face by Robert Stack in one scene, to staying the night with him, getting up at the crack of dawn to get made up for him and draw his bath, and then prepare his breakfast just how he likes it. All of this is accompanied by that syrupy-sweet 50s scoring that almost always gets on my nerves. I’ll give Fuller credit for having an interracial romance on-screen long before it was politically correct to do so, but I can’t call it a successful one. This is personally disappointing to me because I thought he handled the subject well in The Crimson Kimino (a later Fuller film). Perhaps he learned from his missteps here and rectified them in that film. 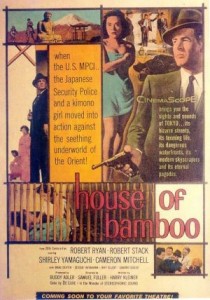 The film was shot on location in Japan, and was the first American studio production to do so. I’m honestly surprised it took ten years after the end of World War II to get there, but perhaps everyone needed a bit of a cooling off period. The Quiet Man, which made everyone want to shoot on location was only released a few years earlier in 1952, so perhaps that also suggests a reason why it took so long. In any case, Fuller does his best to utilize the Japanese landscapes and inject as much Japanese flair into the film as he can. It’s definitely a foreigner’s eye view of the country, feeling in parts like a travelogue of sorts, but Fuller is a good enough filmmaker to weave the elements together so that it’s not glaringly obvious exotic color. Not to mention that unlike a lot of filmmakers, I feel confident in the fact that Fuller respects the culture he’s working with and hopes to broaden people’s minds by utilizing it for his film. No one was using actual ethnic actors in ethnic roles back then, but Fuller wouldn’t do the picture otherwise. Admittedly, Susan Yamaguchi has a very white-girl look to her, though, so I’m sure there was something of a compromise between Fuller and the studio on the actress.

House of Bamboo wasn’t a Fuller-generated project, and perhaps that explains why it doesn’t feel as hard-hitting and primal as his other work. Initially Fuller wanted to make a film about ex-GIs pulling bank heists like military operations, but Daryl Zanuck was more keen on making a couple of other films adapted from novels (which were both later made by other directors). Eventually Zanuck convinced Fuller with the promise of shooting in Japan, and gave him the screenplay for the 1948 film The Street With No Name to craft his film on. Fuller adapted the script into one of his own (even though the on-screen credit indicates otherwise), inserting elements of his ex-GI heist film. This results in a film that feels somewhat watered down compared to Fuller’s best films.

House of Bamboo is also laced with tension resulting from the then-current Westernization of Japan, and the ever-present abrasive American spirit. Maybe it’s just the film noir feel to the dialogue, and the introductory scenes of Robert Stack’s character going around and attempting to rough up Pachinko parlor bosses for protection money, but the Americans are definitely the assholes here. As Fuller is generally concerned with presenting a heightened, melodramatic version of reality in his films, the holier-than-thou asshole Americans rings true. The Tokyo locales and the cultural aspects that Fuller ropes in also add an undeniably interesting layer to the film, and one that, coupled with the beautiful photography, is really the shining achievement of the film. I couldn’t have asked for a better man to capture post-war Japan in the 1950s than Samuel Fuller.

As for the acting, Robert Stack plays the lead very well, and Robert Ryan is phenomenal as the gang leader. Ryan goes through a range of emotions in a role that would generally be one-note. The big scene is probably the one where he finds himself metaphorically against a wall, having to kill his most trusted associate. He does so in a quick moment of violence, shooting six bullets clean through the man and the wooden bathtub he sits in. He then walks in close and has a heart-to-heart with the corpse, lamenting that he had to kill a man he trusted and truly cared for. I know back in the day showing a gun and a victim in the same shot was taboo, but it happens in House of Bamboo a couple of very prominent times. Fuller never shied away from violence, and while this film is far from a violent movie, it does contain some strikingly violent images.

The heist scenes (what little of them there are) are flawlessly filmed and absolutely engaging to watch. These heists have a raw energy in the camerawork that showcase Fuller at his best, and I only wish that Zanuck had allowed him to make the damn heist picture he originally intended to make. Not to mention that what promises to be the film’s major heist sequence is called off before it truly begins in one of cinema’s greatest cock teases. But that’s OK, because this abortion leads us directly into the film’s final half hour which is pretty much perfect. The plot threads finally come to fruition and the climax at a playground atop a Japanese building is simply stunning.

Despite loving aspects of House of Bamboo, the film is something of a disappointment to me. Through its first two-thirds it tries hard to be a romance/crime/noir film, but for me it never quite comes together until the third act when the romance and the noir are ditched for pure crime action. The film is also Fuller’s most studio-like film yet, and as someone who adores his reckless, independent spirit in films like The Steel Helmet and Park Row, this sort of rubs me the wrong way. That’s personal preference and unrelated to the actual quality of the film though, which for all its missed opportunities is still pretty good. I just wish that middle, romance-heavy section was shorter. Star Trek fans will enjoy seeing DeForest Kelley as one of Ryan’s gangsters in a fairly prominent role with a couple of good lines. And this is stupid of me, but with Robert Stack in the lead, every time he spoke I kept thinking of Unsolved Mysteries. That voice used to haunt me whenever my parents would watch that wonderful, creepy show.