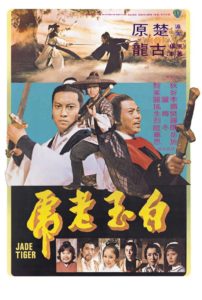 Like many of the Chor Yuen films I’ve seen, Jade Tiger is more concerned with the mental battles of the martial world than the physical ones. As an action/choreography fan, this is always a bit of a disappointment, but Chor and Gu Long have packed this one full of enough story and emotions to adequately make up for this. When it does burst into action, choreographers Tang Chia and Huang Pei-Chih deliver the quality work you’ve come to expect from them. The group fights aren’t anything especially unique, but the action hits its height during the more personal fights pitting our hero Zhao Wuji against Tang Yu (Derek Yee, in his 2nd film & first wuxia), and later Tang Chueh (Lo Lieh). I still wouldn’t prop the choreography up alongside the best from Lau Kar-Leung, but I imagine some of that is just my personal preference towards his style. In any case, when the action is good, it’s beautiful, tense and exciting. There’s less focus on the fantasy elements of the genre, as well, so the action editing is typically more reserved than something like The Web of Death.

At this point, I find myself struggling to come up with more to say about the film. I loved it, but it also hits many similar notes to previous Chor Yuen wuxias, leaving Jade Tiger feeling a bit repetitive. Where each previous film felt like it explored a different side of the wuxia genre, Jade Tiger feels more like a Take 2 on previously explored topics. In terms of its emotional weight and its cohesiveness as a story, it’s probably Chor’s most effective film yet, but something about it didn’t grab me in the same way that Clans of Intrigue or Killer Clans did. It’s a problem I can see resolving itself over the course of re-watches, though. I suppose the shift here is more subtle than before, with Chor Yuen’s overall focus on survival in the martial world twisting into “survival, but at what cost?”

The mutual respect and the rules of the martial world are what holds it together, but it is also what causes its destruction. Jade Tiger showcases this sad reality with a melancholy beauty, proving that even the bonds of friendship, marriage, or honor can’t do a thing to stop the inevitable carnage of the martial world.

Next up in this chronological journey through the Shaw Brothers Martial Arts catalog is Chang Cheh & Wu Ma’s Magnificent Wanderers! See ya then!