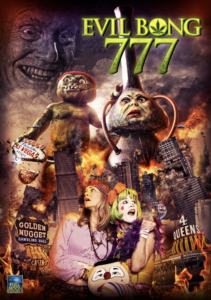 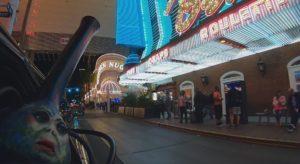 The change of setting does wonders for the series. As a California native, I enjoyed seeing Venice Beach again (and again) throughout the films, but going to Vegas helps Evil Bong 777 have its own energy and identity. It’s something of cliche for characters arriving in Vegas to lean out of the car window and marvel at the lights of the casinos, but Full Moon gives it new life with shots of Eebee peering out at her surroundings. It’s one of those things you never knew you needed in your life, but will always cherish and laugh about afterwards. I also love that they captured the old-school, neon lights of Downtown instead of the overly glitzy modern Strip. They probably didn’t have a choice based on the budget, but somehow I feel like Full Moon would have gone Downtown regardless.

Evil Bong 777 also filters the classic sexual energy of Sin City through the distinctive Full Moon lens, delivering more puppet sex than you can handle. You might think, “I can handle lots of puppet sex,” and you’re probably right, but no matter what your tolerance level is I guarantee one scene in particular will burn itself into your memory right alongside the great puppet sex scenes of yore from Meet the Feebles and Team America: World Police. Believe me, you’ll know it when you see it! Full Moon is no stranger to pushing the boundaries of taste, but this felt like Full Moon going more towards the Troma-style of raunchy comedy than ever before. Whether you like the scene or not, you will remember it, and your mind will be forever warped because of it. And this is only one of the puppet sex scenes! The film’s effect on society will only become apparent as the years roll on by. 🙂 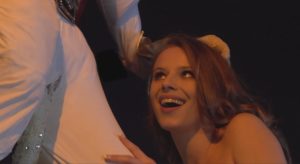 Any fan of the series will be very familiar with the storefront formula of customers interacting with the owners of the weed shop. The efforts to remedy this in Evil Bong 666 were commendable, and this continues in Evil Bong 777. The clerk/customer scenes are still sprinkled throughout the film, but each of them is unique and different than what was seen in previous films. I’d still like Full Moon to push themselves and do an Evil Bong movie without stores, but the subject of franchising came up late in the film so I’m certain stores, in one form or another, are here to stay. If nothing else, I’m sure this helps keep the costs down. Which reminds me, like the last two Evil Bong films, Evil Bong 777 had a crowdfunding campaign on Indiegogo. This one raised an impressive $25,557, the most for an Evil Bong film yet. The campaign description boasts that the backers’ dollars will go towards “Practical Effects! Puppet Sex! And super weird surprises!” and I think it’s safe to say that Full Moon fulfilled their end of the bargain.

Fans of the series should definitely check out Evil Bong 777, although if you’re a fan who stuck with the series this long I doubt you need a push in the film’s direction. It delivers all the stoner comedy you’ve come to expect, and a whole lot you never saw coming. Inebriate yourself and indulge in another installment of the wicked world of Evil Bong. It’s not high art… it’s high art, man.

Next time I get around to a Full Moon movie, I’ll be watching the new one that I missed a while back: Ravenwolf Towers! See ya then!