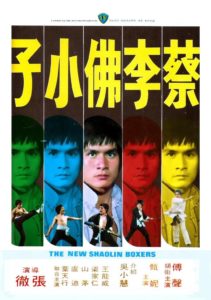 Zhong Jian (Alexander Fu Sheng) is a carriage driver known for his willingness to jump into fights. He always does so with good intentions of helping those in need, but it invariably causes trouble and damage for the townspeople caught in the crossfire. Even though he is trying to help, just about everyone in town cringes at his arrival and wishes he would move elsewhere. The film opens with one of these instances, where Zhong Jian stops a robbery by a well-known scoundrel (Leung Kar-Yan) and in turn gets stabbed. His kung fu master is even sick of him, telling Zhong that he should forget he ever learned martial arts, because it will only bring trouble to him and those around him. But of course, Zhong does not heed these words and eventually finds himself in a series of escalating bad situations. It is here that Choy Li Fut enters his life and the point of the movie really starts to come together.

Zhong Jian is a character of action. No matter what the consequences, he’s the guy that bounds in to save those in need. His purpose is singular, selfless, and noble. Even if he is a little chaotic and misguided during the early parts of the film, his intentions are always in the right place. The townspeople are written to be the good people who think before they act, and in their specific case, they see no way to help so they’d rather do nothing and complain about it. The villains are obviously the opposite of Zhong Jian, also men of action, but they act selfishly and with evil intent. The sub-plot around a pair of the townspeople, Li Ting (Stephan Yip Tin-Hang) and his girlfriend Xiao Li (Wu Hsiao-Hui) furthers the moral underpinnings of the script and brings everything into sharp focus. Through the teachings of Choy Li Fut, Zhong Jian sharpens his soul and his martial skills. He can now be the effective, justice-seeking man he’s always tried to be. The Buddhism inherent in Choy Li Fut is subtly woven throughout the film’s narrative, and it makes me eager to revisit the film.

The action is another great reason to revisit The New Shaolin Boxers. Choreographers Hsieh Hsing & Chan San-Yat (with Choy Li Fut help from Master Chen Jih-Liang) construct a plethora of thrilling and varied fight sequences. Seriously, the film is bursting with fights and every one of them is great. Many different weapons come into play as well, echoing the nature of Choy Li Fut once again. Fu Sheng is the sole star here (another anomaly in the Shaolin Cycle), and he carries the film and its action beautifully. I could watch him fight and practice forms for hours, and this particular film is wonderful showcase of his talents. Leung Kar-Yan and Johnny Wang Lung-Wei are no slouches either, and they each deliver wonderful physical performances, as well.

While I was watching The New Shaolin Boxers, I couldn’t shake the feeling that it was one of the lesser films among the Shaolin Cycle. A lot of it felt redundant of other films, where I felt the others always reached for a new element of the arts to showcase. Thankfully as the film revealed itself, both in the watching and the thinking afterwards, there was much more there than I had initially thought. The Buddhist elements of Choy Li Fut come through remarkable well and set The New Shaolin Boxers apart as a unique film in the cycle. Definitely recommended, especially to Fu Sheng fans.

Next up in this chronological journey through the Shaw Brothers Martial Arts catalog is Sun Chung’s exploitation action film Big Bad Sis! See ya then!