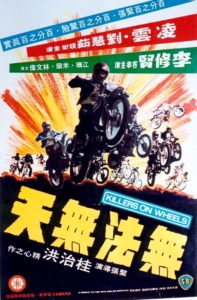 What starts so innocently quickly descends into a harrowing experience for the well-meaning weekenders. Killers on Wheels echoes elements of the biker films before it, like The Wild One or Easy Rider, but over the course of the escalating altercations with the biker gang the film bears more resemblance to a horror film than one of counterculture. Shades of The Last House on the Left are easy to spot, but by the end it has become a full-on Hong Kong version of Straw Dogs (right down to ripping off exact defense tactics like boiling oil). Even with inspiration coming from many sources, Kuei Chih-Hung combines it all effectively into a fast-paced Hong Kong experience that satisfies as only Hong Kong films can. It helps that I don’t like Straw Dogs and I love Hong Kong movies, but I think Killers on Wheels has more than enough originality and quality filmmaking to set it apart regardless.

Straw Dogs is a slow-burn film that erupts its pent-up tension into an explosive finale, and while Killers on Wheels also does this, the ramp up is far quicker here. The focus of Kuei’s film is pure exploitation entertainment, and he delivers this in spades. It’s definitely not a martial arts film, but there’s a ton of action and a few brief martial exchanges. It begins similarly to many other Hong Kong juvenile delinquent films, but the biker gang are much more than average delinquents. There’s barely any characterization given to most of the gang members, so they feel like a raw force of chaotic, youthful energy. The gang leader sort of point in a direction and the mob’s instincts dictate the rest. Major conflict arises between the two brothers we met at the beginning of the film, as one is the leader of the gang, while the other is merely a member who harbors an envy of his brother’s power.

The other major difference between Killers on Wheels and Straw Dogs is the presentation of the man who must protect his family. Dustin Hoffman plays a bookish guy who is fearful of conflict, and the events of the film push him to the brink of his patience when he finally moves to defend his home and family. As I mentioned earlier, there is a hint in the details that Guo Jian-Zhong is already something of a protector figure to his family. He’s definitely not an aggressive guy, but he’s also not the sheepish Hoffman character. Danny Lee’s character also throws a wrench into the proceedings, diving headfirst into the struggle like the alpha male he is. I got the sense that in his past he might have been one of these biker kids himself, albeit one who made it through his youth without doing any major crime (or getting caught). Anyway, when Guo moves to take action towards the end, it feels far less like a “final straw” moment than it does in Straw Dogs. Whether this makes the film more or less successful will be up to the viewer, but I found “Straw Dogs filtered through a Hong Kong lens” to be far more appealing than the base work.

Next up in this chronological journey through the Shaw Brothers Martial Arts catalog is a non-Shaw film that was #3 at the Hong Kong box office and an originator of the Hong Kong New Wave style: Josephine Siao Fong-Fong & Po-Chih Leong’s Jumping Ash! See ya then!