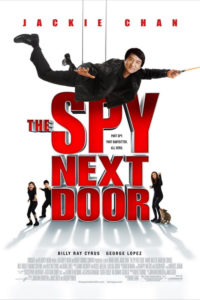 The spy stuff is more a backdrop here than the focus, and as that suggests, so is the action. It’s primarily a family comedy, so if you go into it expecting feats along the lines of the opening clips, you’ll be waiting a while and then sorely disappointed. There are a few great Jackie action moments sprinkled around that will bring a smile to any fan’s face, but none of them really stand out. I watched the movie yesterday, and I’m struggling to remember them. Everything is fun in the moment, though, and it’s all rather well-shot and edited in terms of Jackie’s US films. Judged on traditional Jackie terms this is definitely not up to his standards, but because it’s such a different style of film I don’t think that’s really being fair. 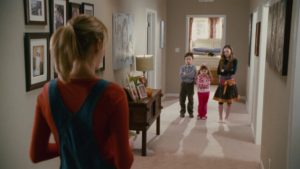 To look at The Spy Next Door as an American family comedy with some action is definitely more fair to the film, but I am about the last person who is qualified to judge anything in that category. I barely watch any modern American films, and when I do, they are just about never family comedies. So I couldn’t tell you where it ranks among them, I can merely state that I didn’t really laugh at anything (other than some neat choreography or the standard Jackie-isms), and I found most of the film pretty painful to sit through. The kids are annoying and unlikable, but LAWD HAVE MERCY the cartoonish Russian villains with overblown accents are even worse. By the end of the movie, though, I must admit that I warmed up to the kids and was even charmed by their arc and the film’s moral. I’m a softie at heart, and the older I get I seem to grow more sensitive in this way. I’m not saying it’s a good movie, but it kinda sneaks up on you if you’re open to it.

Despite its title, The Spy Next Door is a unique movie in Jackie’s filmography. The film was not a big success, but I’d say that an American studio taking a chance on a family comedy with Jackie as a romantic lead in an interracial relationship is something to commend. The focus is never really on Jackie’s physical abilities, either, which allows him to act both comedically and dramatically to carry the film and win over the hearts of the audience and his potential step-children alike.

Next up in this chronological journey through the films of Jackie Chan is 1911! There’s a few movies in between, but I’ve already reviewed them! See ya then!