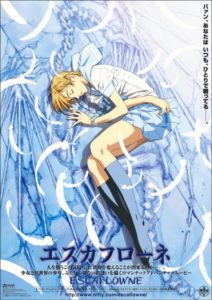 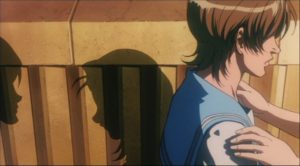 So I’m not even going to compare the movie to the series. The film is its own thing and really ought to be watched as such. A few of the songs are taken from the TV series, but that doesn’t mean they suddenly stopped being awesome, and the new music is pretty solid stuff too. The animation is also gorgeous, especially the swift and brutal action scenes.

The story itself is about as typical as an anime can get. A high school girl named Hitomi gets whisked away to a different world where fantastic creatures and epic battles await. There she meets Van, a king whose country has been destroyed and his family killed. Van seeks a magical robot called Escaflowne, and it seems Hitomi is the key to unlocking its power. And of course there’s an evil empire trying to get the Escaflowne first. 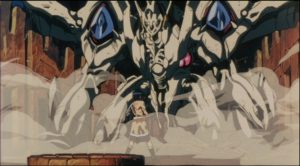 Hitomi herself is suicidally depressed, and Van also seems to have a death wish. Without his kingdom, Van has only his desire for vengeance left, and he doesn’t really care if he dies in the process. Folken, the main villain of the film, is also so bitterly depressed that he wants to destroy the world, himself along with it. This is an especially prevalent concept in Final Fantasy games. Despite that, Escaflowne looks at the concept of suicide and depression in a much more focused way than your typical insane anime villain story would, and that made me very interested to see how the film would tackle the issue.

Unfortunately, it just doesn’t have time to do the situation justice. There was certainly a lot of effort to connect this thread of suicidal characters, and I do appreciate its attempts to make Hitomi understand the emotions and motives underlying Van and Folken so that she could reach out to them. But it would have worked better with more time to show those characters evolving. As it is, Hitomi seems to just shift from nihilistic despair to deep concern in a heartbeat, and that kinda undermines her character arc. 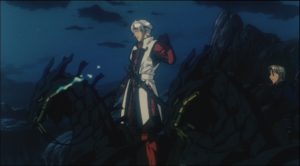 Because of this it feels like the film is treating the subject of depression somewhat glibly, which I don’t think it was trying to do. It just had more ambition than time, and its primary theme isn’t the only thing shortchanged here. Characters have little to no background, and the magic powers don’t really get much of an explanation. That being said, the magic in this film is pretty badass, and I was delighted to suddenly find out Van and some of the other primary characters are freaking wizards in this film, unlike their TV versions. I also loved the horses that had strange exhaust pipes coming from their mouths. There is a lot of fun stuff going on in this film, you just have to be willing to accept it in spite of its shortcomings.

Overall, I had a good time with the film. It’s nothing like the TV series, and that can be a good thing if you are able to separate the two. The ideas are good in this movie, and they look beautiful. I just wish those ideas had more room to grow. If you’ve never seen Escaflowne, it’s a good film to check out. And if you have seen the series before, just pretend it’s not Escaflowne; maybe you’ll like it more that way.