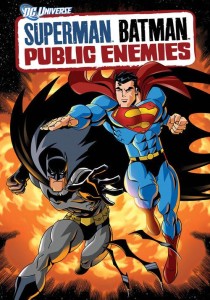 I was slightly worried that Public Enemies wouldn’t work well for a Superman film review because he has to share the screen with Batman, but when you get down to the story, it mostly revolves around Superman himself. Batman gets plenty of time to shine, but the core troubles touch mostly upon Superman’s world. Batman is more of the buddy who decides to lend a hand when Superman’s world goes to hell.

The film starts off with Lex Luthor somehow getting enough votes to become President of the United States. At first, everything seems fine, but we all know that isn’t going to last. Surprisingly, the initial problem does not come from Lex’s evil scheme, but from a giant meteor headed for Earth guaranteed to cause horrific destruction. Now why doesn’t Superman head out to solve the problem? Mainly because the meteor is made out of kryptonite which means they have to find a more mundane solution. 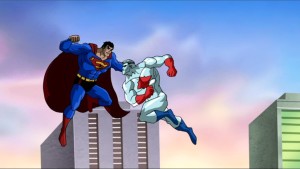 And of course it’s a perfect time to complicate things by having that evil scheme come into play as well. Lex frames Superman for murder, and then puts a billion dollar bounty on his head. Now trying to take down Superman may be one of the dumbest things someone can try, but it seems like there are plenty of people dumb enough to try.  And it sure provides a fun action extravaganza as Superman gets attacked by a small army of opportunistic super-villains.

The action scenes are plentiful, and they look pretty good. The animation isn’t amazing, but it holds it’s own quite well. There is a lot of CG, which always bugs me, but to be honest, anime creators ought to crib a few notes from DC’s animation crew in this regard. The CG is blended into the film’s visual style much better than most anime I’ve seen. 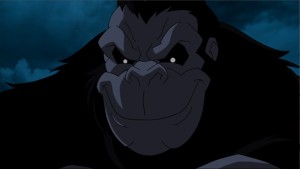 Still there was something else about the visuals that seemed lackluster, and for a while I couldn’t figure out what it was. Eventually it dawned on me that it was the background art. It’s pretty simplistic stuff, and makes the movie come across more like a TV series than a proper film. Anyone who thinks that background art doesn’t add much should watch any Makoto Shinkai film for proof of just how much it can do.

There were a few other things I thought could have been done better. The biggest is the fight with Superman and Batman vs. Captain Marvel and Hawkman. We don’t see the ending to it. I know why they left it out, but I think the incomplete feeling it generated is a bigger drawback than missing out on the not-very-surprising twist that was meant to surprise someone. I also found myself repeatedly saying, “Come on Superman, you can take that hit!” For being damn near indestructible, the guy sure gets knocked around a lot. But then where would the tension go if nothing even fazed him?  On the other hand, there were also moments where I was surprised at how well he handles kryptonite. I thought that stuff would have killed him by then. 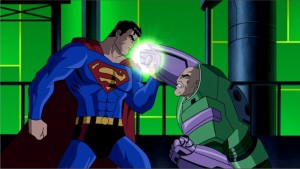 There’s also an odd bit of comic book logic when Lex reveals his evil plot and how the army responds to it. But then I don’t really know what would happen if the president suddenly turned into a maniacal lunatic with a green and purple robot suit. Would there be a long-winded Clinton-esque impeachment process while he flies around and shoots the place up? I’m not sure there are any legal provisions for such an occurrence, so maybe the film really is spot-on with that part.

Overall, there’s plenty of superhero fun crammed into this film, and if you want to see Superman and Batman beat the stuffing out of a swarm of bad guys, then look no further. But do bear in mind that most of those other characters get little to no attention. Just accept that they are there to be punching bags and don’t worry too much about who they are or what they’re doing.