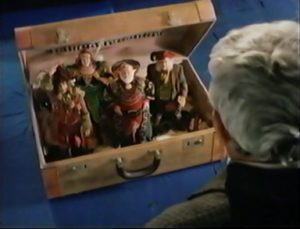 Along for the ride to America are King Kevin of the Leprechauns (Godfrey James) and Queen Maeve of the Fairy Folk (Tina Martin), who accompany Michael to “preserve the power balance” and provide a bit o’ luck to his journey. A pair of leprechauns (James Ellis & Sylvester McCoy) come along as well, but who knows why. I got the feeling that leprechauns enjoy company, so why go alone when you can take a couple of your leprechaun buddies with you? Anyway, their presence in the US becomes the focus of the film, as Michael visits his son and his typical American family of the ’90s. They are emotionally detached and out of balance with the natural world, so they all think Gramps is crazy for his belief in and conversations with the wee folk.

I don’t have a lot to say about this movie because there isn’t much here. It’s not a plot-driven film at all; it just sort of sets everything up with Ireland Land and then we watch a bunch of leprechaun shenanigans for the next hour. It’s a movie that gets by entirely on its charm, which it thankfully has a lot of. I could be biased as I grew up watching Darby O’Gill and the Little People and The Gnome-Mobile, but whatever the case, I enjoyed my time with the characters. 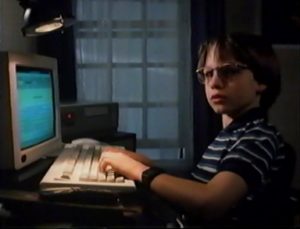 Now that I think about it, the way the film is structured is potentially part of the film’s message on slowing down and enjoying the little things in life. Instead of jamming a plot down our throats, Leapin’ Leprechauns allows us the time to sit around with the characters and get to know them. Grandpa Michael is visiting his relatives, and in a way, we’re like the leprechauns who stowed away in his suitcase. We’re taking a break from a traditionally structured film to re-connect with what makes life worth living. Sometimes just staying at home and playing horseshoes, or taking a walk in the park are exactly what we need to revitalize our fast-paced, modern lives. The world has only gotten worse in this regard since 1995, so Leapin’ Leprechauns is a good candidate for re-discovery, too!

If you enjoy all things leprechaun and you’re in the mood to be charmed, you’ll have to do some digging because Leapin’ Leprechauns! hasn’t been available since VHS. But if you’ve done your homework, you have the film AND you’re ready to be charmed, then this one should fit the bill. 🙂

Next time I get around to a Full Moon movie I’ll be checking out the sequel at the end of the rainbow: Spellbreaker: Secret of the Leprechauns! See ya then!