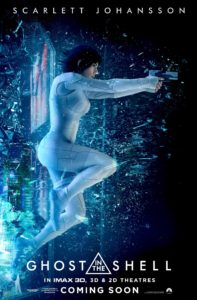 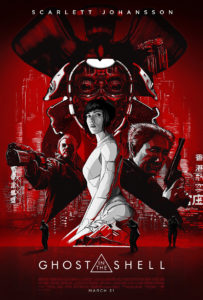 Because most of the scenes are ripped from previous titles, I didn’t feel like I was watching a movie so much as a film version of a spot-the-difference book. “Oh, here’s the scene with the ghost-hacked garbage truck driver; let’s see what they did different this time.” Well, it turns out they do make a lot of plot changes. The events are the same, but they happen in a different order with different outcomes and for different reasons. It’s like watching Robotech rather than Macross, although it might be better to compare it with a franchise that I am not familiar with at all, Power Rangers (which coincidentally has its own new live-action film) and its reliance on stock footage from the Super Sentai series. It’s basically the same stuff, but the story is rewritten and re-shot with new actors to better fit a modern American’s expectations.

This means that the new stuff is pretty formulaic and predictable. The villain is one of those corporate assholes doing illegal science experiments. And there’s memory alteration, too. We’ve had this basic setup at least since Arnold showed us how it was done in Total Recall, and this is no Total Recall. When it isn’t copying the anime shot for shot, the action is either ironically reminiscent of The Matrix, or it is obnoxious, quick-cut modern action editing. One particularly bad fight used glowing stun batons in a nearly pitch-black hall. The rapid edits combined with waving glow-sticks created a strobe effect that was physically painful to watch.

The setting reminds me less of Ghost in the Shell and more of Blade Runner or Akira with gargantuan buildings surrounded by holographic billboards. Except, of course, for the scenes copied from the original film, which still look like 1990s Hong Kong. The setting itself is rather confused anyway. The anime of Ghost in the Shell is clearly set in Japan. This film is some strange nonexistent place where half the population are white English speakers. The big evil corporation has an obviously Japanese name, Hanka, but I don’t think there was a single Japanese employee there. On the other hand, the other half of the population is Japanese, most of the signs around town are written in Japanese, and there is a prime minister rather than a president. The Japanese characters often speak Japanese, even when talking to English speakers. Both sides understand each other and talk in their native tongues, casually carrying out bilingual conversations.

This leads me to the controversial casting of Scarlett Johansson as the renamed version of Motoko Kusanagi. They gave her a Western name, but I can’t remember what it was; she usually just goes by Major, anyway. I’d have to go into spoiler territory to talk much about it, but the plot gives some amount of justification for the choice. I’ll just say that I’m kinda on the fence on whether to be annoyed or not. Yes, I’d have preferred to have an unknown Japanese actress play the role, but I’m leaning towards forgiveness since the film needed a big name star to attract an audience, and that gives very few options, unfortunately. It’s not an endorsement or anything, but this is the situation we and this film are stuck in, and the fact that the movie even bothers to bring up her ethnicity is better than a lot of other films in the same boat.

But if the star needed to be white, at least they tried to get some Asian supporting cast members to play the other characters. Batou (Pilou Asbæk) is white, but I think he was always supposed to be, even in the anime. He’s stated in the anime films to be a former Ranger in the military, and while that’s as specific as it ever got, I’ve always assumed they meant U.S. Army Rangers. Togusa played by Chin Han is definitely Asian, but he doesn’t get much screen time. I especially liked Takeshi Kitano’s performance as Chief Aramaki, though. Now Aramaki has always been stoically badass, but here they took him to a new level. I actually might like this version of him better than in the anime, and his scenes were by far my favorite parts of the film. I don’t know that he alone justifies watching the movie, but he at least ensured that I had some fun with it.

What will really determine whether it’s worth watching this film is how much you like modern Hollywood movies. I suppose that means the film is a success in that it has accomplished its goal of dumbing down the concepts of Ghost in the Shell into the money-making formula that Hollywood relies on. And you know what? I hope it does make some money. That Hollywood formula succeeds in part because it is familiar and people are drawn to what they are familiar with. And if this watered-down version makes people familiar enough with the concepts of Ghost in the Shell that someone out there will be willing to broaden their horizons and check out the original film, and then perhaps move on from there, finding things they never knew they liked, well, I can only call that a good thing.

So do I like the film? Eh, not really, but I don’t have any hatred for it either. It doesn’t insult or corrupt what the franchise is about. It encompasses just about everything a Ghost in the Shell film should, though in a much more simplistic and obvious way. About the only thing it’s missing is the fuchikoma/tachikoma/logicoma/whatever-kind-of-coma sidekicks, but those cheerfully masochistic robots are always comic relief, and American audiences would have balked at the suddenly shifting tone they create. Its themes and plot are mutated into generic Hollywood equivalents, but those equivalents are still the themes of identity and freedom that the franchise is all about. Aside from a couple of fight scenes, it’s not made so incompetently that it disgusts me, and it does have a few things I actually like.

It was a kinda fun science experiment to play spot the difference and see just what they changed around for this version. If you’re curious, I say go ahead and watch it, though don’t expect anything amazing. It was nowhere near as good as I had hoped, but it was nowhere near as bad as I had feared either. In the words of the late, great Douglas Adams, it’s “mostly harmless.” Just watch out for that strobe effect.