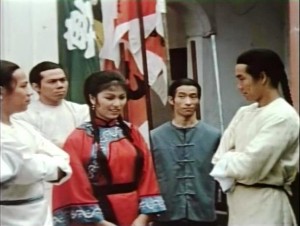 What little plot there is swirls around a student of the Ten Tigers and his kidnapped wife. Each of the Ten Tigers pursues the kidnapped woman and in doing so is ambushed, over and over and over and over again. You have teahouse fights, fights in tall grass, fights on cliffsides, fights in kung fu schools and Buddhist temples. Also, you get absolutely shameless FULL FRONTAL NUDITY at no added cost! As well as plenty of SOCIAL COMMENTARY in the form of a phony Taoist priest who scams the locals for money and blesses them until they feint at his feet, obviously a tip of the hat to the rabid evangelical money-grabs you often see on TBN during dinner hours… OK, well maybe those parallels weren’t intended, but I was able to draw those grim similarities, intentional or not.

The actors portraying the Ten Tigers play out like a dream team of second-rate kung fu stars and talented but forgotten Shaw Brothers rejects. You have Larry Lee, Jason Pai Piao, and the beautiful but deadly Michelle Yim fighting alongside Bruce Leung. They all seemed to have made a name for themselves grinding out these low-budget independent kung fu films from the ’70s. The only slightly better known Han Kwok-Choi provides some substandard comic relief here and there as he hams it up and grimaces for the camera. It gets a little better when he gets to dish out a little low-grade drunken boxing. He truly shines however when he goes on an unholy rampage of testicle crushing which occurs in nearly every fight scene he’s featured in. There are two types of on-screen humor I am pretty certain will never go out of style, farts and gonad injuries. Luckily this film has enough of the latter to carry you through its duller moments. 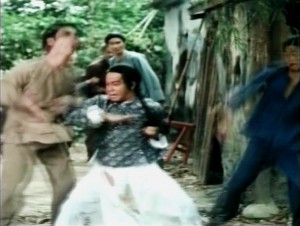 Bruce Leung (who is actually credited as Bruce Leung in the credits, a rarity in his earlier films) is clearly in his comfort zone here with the more traditional arts and shows none of the sloppy uncertainty he did while being forced to put Jeet Kune Do on display in The Dragon Lives Again. He’s a fucking monster on the screen and sports the same calloused knuckles that he still has now, over 30 years later. Just watch for the brutal and devastating ass handing he dishes out to a swarm of guys with rattan shields and knives towards the end of the film. It makes you wonder why he was ever even considered as a Bruce Lee clone when his true talents so obviously lie elsewhere.

Anyway, the film culminates in, and is famous for its epic final fight scene… which comprises a third of the film’s total running time! In most circumstances this could be a double-edged sword, but Ten Tigers of Shaolin keeps it fast paced and interesting enough to justify its 30 minute duration. It is an absolute orgy of fists, feet, spears, knives, and swords. Bruce Leung has never looked better, and really separates himself from the rest of the fighters here. It’s at this point the film finally comes to terms with itself, lets go of what little pretense it has and completely lets loose. Wave after wave of bad guy cannon fodder comes screaming in from all directions as our heroes have their way with them. This is intercut with delicious longer duels featuring the main bad guys. Forget about plot. Forget about dialogue. This is the stuff that scratchy, low-budget kung fu magic is made of.