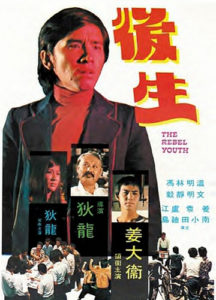 Supporting his family on the salary of a delivery job isn’t enough to make any headway out of their poor situation. He tries to take what little extra money he has and gamble in into something more, but he receives no respect from the man running the table (Sammo Hung!), even when he wins. His boss (Chiang Nan) is a real hard ass, at times with good reason, but mostly just because he enjoys exerting his power over his subordinates. Xiang has a small group of friends who pool their resources to share a better lunch than they could provide themselves individually, but even this is taken from him when some local thugs seek to humiliate and rob them.

Xiang is the young rebel of the title, but the execution of this rebellion comes in a much different manner than you would traditionally expect. When his father dies tragically and his youth is stolen from him, he gets a job he hates and he sticks with it for a few years. He doesn’t necessarily do the best job he can (a small, personal rebellion), but he does continue onward to support his family. He is a character shackled to his responsibility and no matter how much he fights against this, he never leaves his family in the cold. He is a rebel in spirit, but without the conviction to throw his life away. This leads his internal rage and frustration with the world to continue building, placing him into more than a few sticky situations and providing the audience with an excellent, meaty performance from David Chiang.

Along the way, Xiang decides to take up kung fu to help protect himself, which leads to some intense, brutal manifestations of the martial arts. Every one of Xiang’s hits are powered by his internal well of boiling rage, and Chiang’s martial performance and the sharp sound effects work illustrate this beautifully. The choreography from the terrific trio of Lau Kar-Wing, Chan Chuen and Huang Pei-Chih is quite good and often sees Chiang face up against multiple opponents at once. He even uses a leg of lamb as a weapon in one fight! Ti Lung’s character is just a small supporting role, but he still gets a few opportunities to remind us how great he is (as if we would forget! 🙂 ), and at one point does what appears to be a standing jump over a car! Whoa! I’d also like to note that watching this directly after seeing Jackie Chan: My Stunts led me to appreciate the intricacies of the choreography even more so than usual.

I haven’t heard one thing about The Young Rebel one way or the other, and the film is far too entertaining and interesting for this obscure fate. If you get the chance to see it, definitely give it a go! Let’s hope that at some point in the future Celestial releases it digitally for easy access, too.

Next up in this chronological journey through the Shaw Brothers Martial Arts catalog is the classic Ho Meng-Hua film that introduced the kung fu film world to one of its favorite weapons: The Flying Guillotine! See ya then!