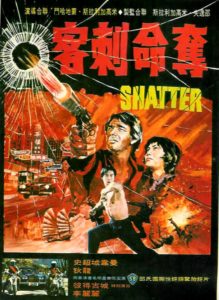 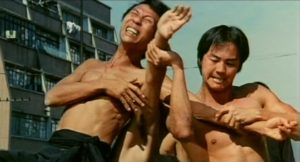 I wouldn’t mind the incoherent plot so much if the movie was at least entertaining. It’s supposed to be an action thriller, but it’s incredibly boring and languidly paced, which doesn’t exactly scream out “action thriller,” now does it? A thriller requires a drive that pushes everything forward and Shatter most definitely does not have this necessary component. The action is also sub-standard by Shaw standards, although Ti Lung does show off his skills rather well (as you’d expect). The camerawork leaves a lot to be desired in these action scenes, though, with lots of tight close-ups, medium shots missing a lot of the action, and wide shots so ineptly framed that heads are often cut off. Oddly, it seems that Chang Cheh was on set to help with the action scenes. I’m going to guess that he was more of a communicator with the Chinese actors than a director in this instance, because there’s no way he’d film action as poorly as this.

Shatter does have a couple of saving graces that make it somewhat tolerable. It was filmed completely on location in Hong Kong, and it catches tons of great shots of the city. No matter how boring the story is, I will always be fascinated by this type of window back in time. I can’t recall any of the Shaw films of this era capturing the city in quite the same way. I wonder if this is due to the non-Chinese directors, coming to the city for perhaps the first time and desiring to capture more of the local, “exotic” flavor than the Shaw crew who lived and worked there for many years. Whatever the reason, Shatter offers a lot of wonderful views of the cluttered city streets and the natural surroundings outside the urban areas. It doesn’t really offset the slowness of the film, but it does ease it some. 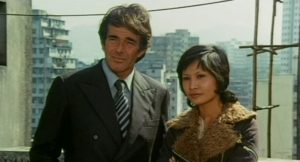 Lily Li is horribly wasted in a love interest role that doesn’t add much of anything to the film, but Ti Lung is allowed a lot more screen time to show off his martial skills. His character doesn’t really do much besides this, but we all love to see Ti Lung kick ass so I can’t complain too much. As I mentioned the framing of the fight scenes is often poor, and the editing kills a lot of the momentum (especially when Shatter is there and they have to keep cutting back to him). A lot of the fights are filmed in a strange slo-mo, too, which on one hand allows a closer examination of Ti Lung’s performance, but it’s also not implemented very well in terms of impact. But regardless of the issues, it’s still Ti Lung being the ultra-badass he is, and that quality shines through. Like the location shooting, it’s not enough to make it a good film (or even mediocre), but it is always a welcome diversion from the plodding story.

Shatter is far from a good movie, but if you’re a big enough Ti Lung fan you’ll probably get something out of it. Not much, but if nothing else you get to hear Ti Lung speak English, in his natural, undubbed voice!

Next up in this chronological journey through the Shaw Brothers Martial Arts catalog is the final film of 1974, the Italian co-production This Time I’ll Make You Rich! See ya then!