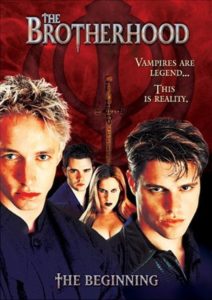 The film’s production is also of a higher quality than Full Moon films from the same year. I thoroughly enjoyed Prison of the Dead, but its low budget and quick shooting schedule are apparent through the entire film. It barely cracks 70 minutes, and that’s including both opening and end credit sequences! As much as I liked it, it’s hard not to see a film produced in this manner as more of a cash grab than a real attempt at making a great movie. This kind of methodology is what defines the modern-era Full Moon film, but The Brotherhood is instead made like a “real” movie, in that it spends time building its characters and the world they inhabit, as well as trading in the kind of slow-burn tension rarely seen in Full Moon’s films. This does make for a slower type of movie that’s not as fun as it could be, but it’s hard not to respect The Brotherhood for setting itself apart so definitively from other, trashier B-movie fare.

That’s not to say that The Brotherhood is without its trashier elements, though. Instead of the traditional B-Movie formula of T & A, The Brotherhood leans in a more homoerotic direction. The vampires perform their rituals clad only in tight boxer briefs, and the camera focuses a bit more on the male form than a traditional movie would. But regardless of your sexual preference, there is an undeniable sensuality that runs through the entire film, hitting its height during a scene when the lead vampire Devon (Bradley Stryker) and our “hero” Chris (Sam Page) feed on a very accepting and willing woman. DeCoteau shoots all the participants lovingly, capturing the beauty of both genders with ease. DeCoteau also shoots the film in a 2.35:1 ratio, and the added width of the image helps to photograph the curving lines and moving shapes made by the writhing bodies in ways that taller ratios wouldn’t allow for.

As much as I enjoyed The Brotherhood, I don’t think it’s a movie for everyone. I wish people were all open-minded and willing to watch a movie that doesn’t specifically serve their sexual interests, but the sad case is that a lot of horror fans are dudes, and a lot of dudes don’t want to see homoerotic stuff (but football is great! 😉 ). That being said, this film spawned five sequels and a pseudo-sequel (The Sisterhood), so perhaps people are more open-minded than I’m giving them credit for. In any case, Rapid Heart Pictures is still running strong, so DeCoteau definitely tapped into a thriving, hungry, and underserved audience.

I look forward to checking out the sequels and seeing what direction they take the story/mythology. Unfortunately, my cursory searches indicate that every sequel is unrelated to one another. Hmmm. Oh well, I just hope they’re interesting and original like this one was.

Next time I get around to a Full Moon movie I’ll be watching the 1993 Albert Pyun film Arcade! See ya then!