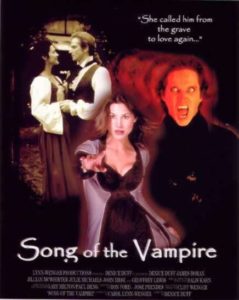 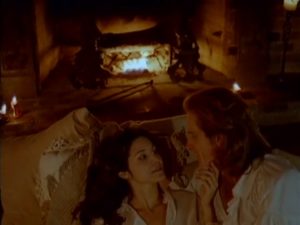 Song of the Vampire doesn’t delve into the duality between the male characters or the potential feminist angle, and this unexplored potential disappointed me. It’s rare that a B-Movie has such an interesting setup of characters at its core, so to go only halfway with it was frustrating. On top of that, late in the film the abusive ex-husband basically teams up with Caroline’s aunt. Regardless of the obstacles she faces, there’s little chance that Caroline’s loving mother figure would do this with a full knowledge of what this dude has done. Perhaps I’m naive about what an elderly woman would do in the face of a vampire, but it just felt wrong to me.

It’s a shame, too, because other than that, Caroline’s aunt is a great character who fills a Van Helsing-style role in the story. She’s not a scholar or an experienced vampire hunter, but she is a student of the supernatural who dabbles with it regularly. She’s daring, too, going so far as to track the vampire to a cave during the day with the intent of driving a wooden stake through his heart. Auntie don’t mess around! I loved her, so it really tore me apart to see her team up with the ex-husband without any qualms. 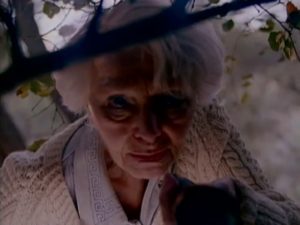 Denice Duff’s direction is surprisingly solid for a debut film, but at the same time, the film is filled with numerous instances that make it seem like a rushed, haphazard production (a note at the end of the credits instead suggests it was made as an exercise in having fun). The most glaring issue is the supporting performance of the boom mic. The mic makes his appearance in so many scenes that I lost count, but almost all of them could have easily been remedied with some careful cropping, or a second take. I understand that low-budget films might not have the time or funds to fix these issues, but I would think something as amateurish as a boom mic entering frame would be corrected, especially in the age of digital editing and image manipulation. It’s also possible that the film was intended to be cropped to a 1.85:1 ratio, and the way the image is framed seems to support this. Who knows? It didn’t particularly bother me, but I think for many it would be instant grounds for stopping the movie. Although, if you’re watching this one, you’re probably a pretty hardcore horror/Subspecies fan, so maybe not.

At times atmospheric and alluring, at others amateurish and dull, Song of the Vampire remains interesting for fans of Denice Duff, romantic vampire films and B-Movies. There’s also a surprising amount of effective comedy. I wish it were more fun, but I liked it for what it was. My biggest takeaway is that Denice Duff should have continued directing; she shows a lot of promise, and female perspectives on the horror genre are always welcome and refreshing.

Next time I get around to a Full Moon movie I’ll be watching David DeCoteau’s Prison of the Dead! See ya then!