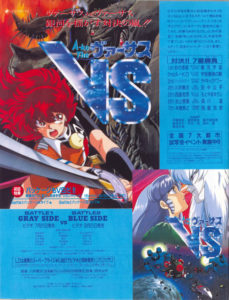 C-ko is just ten years old in this series, so her personality actually matches her age now. A-ko and B-ko are pretty much the same except that they actually like each other. Not that they get along all that well, but their bickering is more playful than city-demolishing. The villains are pretty straightforward. Liza is a blonde bombshell that matches A-ko in strength, while her partner Grash is a fairly amiable guy that doesn’t have much of anything special about him. Their leader Gail is a pale, brooding fellow with a troubled past, proving that Sephiroth was far from the first time this anime cliche got bandied about.

Obviously this is a vastly different story from the original films, but I have no complaints about the change of premise. As I mentioned in my review of Project A-ko 4, the series was starting to stagnate, and the filmmakers had realized it. The A-ko versus B-ko premise was doomed to grow old and stale. Any new plot line would have to work through or around their feud before it could get to the point, and removing either character would be removing one of the defining aspects of the series. Making A-ko and B-ko friends was a way to keep the characters relevant while opening up the potential for new adventures. They could have had the girls become friends in the main series, which the ending of Final sorta implies will happen, but Nishijima decided to completely reboot the series in space instead. 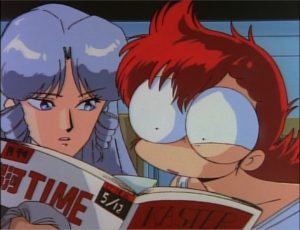 Unfortunately, while I am fully on board for the premise, A-ko: Versus isn’t all that amazing. While I never really thought the Versus series was bad, I’ve always felt it was the weakest of the A-ko anime titles. This time around I enjoyed it a bit more, but it still has its flaws. The first of which is that it isn’t really all that funny. It has its moments, but it has a very different tone and style than the films. The earlier titles stuck to the comedy, blending it into everything. Even the dramatic scenes were used for parody. Versus, however, tends to only do one at a time, bouncing back and forth between drama and slapstick. It no longer comes across as a parody, or even a dedicated work of comedy; lots of scenes carry a serious tone.

Watching it as a more mature connoisseur of anime, I can see what it was doing, and I now have a better respect for it. In my younger days I wanted it to be just like the earlier A-ko films and felt the more serious moments were a boring waste of time that could have been spent making me laugh. Of course the story is also pretty generic, which doesn’t help. It wasn’t fresh or new even when it first came out. And since the serious moments are sandwiched between bouts of ludicrous slapstick comedy, they often lack the time necessary to build up emotional torque. But all in all, they work surprisingly well at keeping the series engaging despite these limitations.

As for the ludicrous parts of the series, they are very ludicrous and occasionally they can be every bit as hilarious as the earlier entries in the franchise. They are a different type of humor, however. The movies primarily worked through absurd situations to make their jokes, but here it tends to be straight-out slapstick, far more akin to watching a Looney Tunes episode. This isn’t a bad thing, but it can certainly disappoint viewers expecting or preferring A-ko’s usual brand of humor. In some ways, this actually helps it, though. Because it is only specific jokes that are humorous, it doesn’t take much away from the dramatic aspects of the series.

The animation is probably the weakest part. The A-ko sequels were never as well animated as the original film, but they were still pretty solid. A-ko: Versus is a further step down from that. It’s still completely watchable, but there is a noticeable lack of smoothness that is disappointing after watching the other films. This is mostly true of the action scenes. The A-ko films always took care to make the action scenes look good. And since the action in Versus is very integral to the series, it is rather disappointing to see it watered down with lackluster animation. But even with that caveat, the fight scenes are usually the most enjoyable part of the series. They have the best of the show’s humor, and they can be quite entertaining.

After all these years I’ve finally come to terms with this series, and I actually had a good time watching it. As with A-ko 4: Final, I have to wonder what it would be like if the Versus series had continued on. I certainly think it had the potential, and a lot of the changes it made would have worked well for a longer running series. It’s not quite as good as the films (aside from Cinderella Rhapsody), but it is a series that I can comfortably say is fun to watch. And if it had kickstarted a new era of Project A-ko shenanigans, I would be happy to go for the ride.