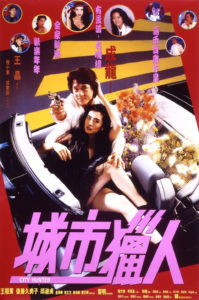 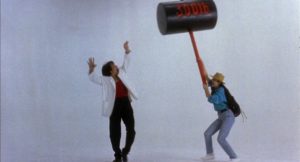 Jackie plays the womanizing private eye Ryu Saeba, who has raised his murdered partner’s cousin, Kaori (Joey Wong Cho-Yin), since she was a small child. Kaori’s fallen for Ryu, and he likes her too, but he swore to his partner that he’d never date her. Anyway, they receive a job from a rich businessman to find his missing daughter, Kiyoko (Gotoh Kumiko), and this leads Jackie to stow away aboard a cruise ship. The madcap insanity kicks into high gear and continues on the high seas, with international terrorists, deadly card sharks, and more cartoony hijinks than you ever thought were possible in a live-action film.

Wong Jing is known for crafting films with this kind of reckless insanity, and for some reason I feel like City Hunter is kind of a tame film for him. I’ve seen less than 10 of his 100 (and counting) films, and all the ones I’ve seen were in my teens and I remember nothing. If my reaction to City Hunter is any indication than I should be in for a treat when I eventually revisit them. He got his directing start in the early ’80s with the Shaw Brothers studio, and he has been one of the rock solid pillars of Hong Kong cinema ever since. Judging on his talent for wrangling the myriad plotlines of City Hunter and infusing nearly every moment with frenetic energy and sharp comedic timing, it is with good reason! I really must dig into his massive filmography one of these days. 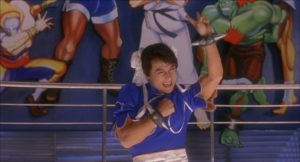 As I mentioned earlier, the film’s action is impressive in how it works with and never betrays the film’s comedic, outlandish tone. It is immediately distinguishable from the traditional Jackie-style fight, as well as fights in other Hong Kong films of the era. The choreography is relentlessly inventive to keep up with this wild tone, and it’s nothing short of perfect. The obvious standout is the Street Fighter scene, where multiple classic characters from the video game are brought to life. It’s a stellar fight, and I don’t think anyone will ever faithfully recreate Street Fighter in live-action form as successfully as they did in City Hunter. Jackie Chan will always be my favorite Chun Li.

Gweilos Gary Daniels and Richard Norton are just as impressive as Jackie in City Hunter, giving him a pair of foes worthy of his best efforts. Norton has always been one of my favorites because of his fight with Sammo Hung in Twinkle Twinkle Lucky Stars, and his work in City Hunter is fantastic. I’m not nearly as familiar with Gary Daniels, so he stood out the most to me. The initial fight between Jackie and Daniels is so fierce, with so many quick, precise movements by both men packed into each shot. I got the sense that if the film’s tone was serious, they could have created something to rival Jackie’s pair of screen fights with Benny the Jet. Daniels is really that good; it’s a shame he never became a huge star. If nothing else, he should’ve done another film with Jackie! Wait… there’s still time, guys! Do it! 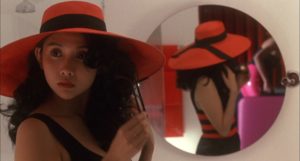 Amidst the comedy and the clever choreography, there are a lot of jokes involving violence directed towards women. None of it feels mean-spirited or malicious, but if you’re sensitive it’ll probably raise your hackles. Women are punched across the room, routinely dropped by Jackie, etc., but honestly, so is everyone else in the movie. Within the confines of the film, the jokes work well. None of the characters are hurt by any of this, because it all fits within the cartoon aesthetic, and the women are also given ample opportunity to beat up the dudes too (Ken Lo really gets it!). If it wasn’t live action, I don’t think I’d even have noticed. So while these moments might be alarming, in terms of City Hunter I think they add to the film far more than they detract from it.

I really loved City Hunter, and I found it an interesting companion to Jackie’s previous film, Crime Story. The films feature opposite extremes, and as such are far more similar than they would appear on the surface. They both take Jackie into new territory and prove that he is more than capable in both capacities. It would be easy to write off City Hunter as dumb and without merit, but that would be neglecting the amount of talent and skill necessary to pull off something this stupidly sophisticated. If you like Chinese comedy (which is definitely a unique, acquired taste), or if you’re open-minded to trying such things, City Hunter is quite an entertaining film.

Next up in this chronological journey through the films of Jackie Chan is the one, the only: Drunken Master II! See ya then!