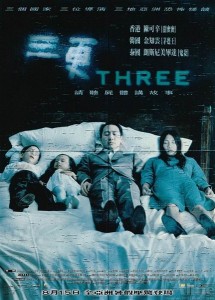 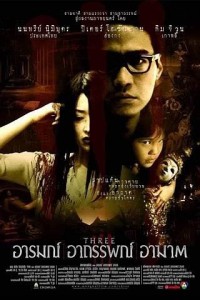 This is my first Kim Jee-Woon film, and I was hoping for a better introduction than this. He went on to achieve a lot of success with the films after this, including A Tale of Two Sisters & The Good, The Bad and the Weird. Most recently, he’s about to make his US début in January with Arnold’s comeback film, The Last Stand. Anyway, the camerawork is great throughout the film, but the storytelling is so abstract and non-existent that it’s hard to really connect with the characters and feel anything that they’re feeling. It’s a hard one to get through, and my least favorite of the three. I won’t let it detract me from seeing Kim’s other works, but I can’t say that it stoked the fire any.

Next we have Thai filmmaker Nonzee Nimibutr’s The Wheel. This segment isn’t quite as nicely shot as Kim Jee-Woon’s but its story is much easier to decipher. It’s also the straightest horror tale in the bunch. At the outset of the story, on-screen text informs us that Thai puppets are cursed and can only be used by their rightful owners. These puppets are highly sought after, though, as they can make the difference between a rich or poor life, and they are often stolen despite the risks associated with them. Of course this means that’s exactly what someone will do! Gotta love horror movie characters!

Because the premise is simple and easily understood most of the segment is spent trying to understand why the imagery on-screen is important to the tale. Most of it seemingly makes no sense, but after the whole thing is done there is a thread to be found. The segment ends on a high note, with some very interesting things going on that work at a couple of levels, but even that can’t save the film from being mostly boring. Another long one to get through, and again, these are each only 40 minutes long.

This brings me to the final tale, this one from Hong Kong, Peter Chan’s Going Home. It’s without a doubt the best of the bunch and I enjoyed it enough to almost make me forget how boring the other two were. I’m sure my familiarity with Hong Kong cinema helped, but regardless Going Home is the clear winner. Eric Tsang plays a cop who moves with his son into a derelict apartment building scheduled for demolition in the coming months. The only other inhabitants are Leon Lai and his disabled wife, and when the two tenants meet it goes from strange to creepily fascinating.

This is another tale that’s not all that scary, but the subjects it deals with put it into the horror realm, even if it’s not really horror as you’d generally define it. Leon Lai and Eric Tsang throw down fantastic performances (as always) and make this the only story where the audience is able to meet a character and get inside their head. The morally dubious heartbreak experienced throughout Going Home is intense and it makes for quite the interesting short film.

Overall, I can’t say that I recommend watching Three in its entirety, but I do recommend Peter Chan’s segment Going Home. It’s really well-shot (with cinematography from Christopher Doyle), and it’s worth your time if you like creepy, brooding, emotional stories. In the US this is known as Three Extremes II, but those looking for extreme Asian horror should look elsewhere. Three… Extremes was the “up the ante” sequel to this film, so billing the original as a sequel to a presumably more extreme film seems wrong to me, but that’s the kind of thing distributors have been doing when bringing foreign films to US shores for years.