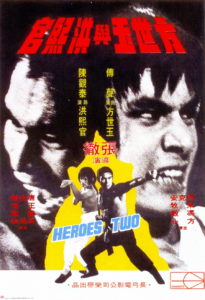 Heroes Two opens with the Manchus burning down the Shaolin Temple, a historically contested event in the history of Chinese martial arts that, regardless of accuracy, served as the catalyst for many kung fu films after this one. The story goes that the Manchus were not successful in killing all the Shaolin students, and that many were able to escape to nearby Kwangtung, most notably the Five Elders. The main survivor we’re concerned with is Hung Hsi-Kuan (Chen Kuan-Tai), an expert martial artist who would develop the Hung Gar branch of kung fu that continues to be practiced to this day (and was the style of folk hero Wong Fei-Hung). One of the film’s choreographers, Lau Kar-Leung, was taught Hung Gar from his father (who studied under Lam Sai-Wing, a student of Wong Fei-Hung’s immortalized by Sammo Hung in the classic Yuen Woo-Ping film The Magnificent Butcher).

Anyway, Hung Hsi-Kuan is injured and on the run from the Manchus, who continue to assault him at every opportunity (which is a lot!). They even fool fellow Shaolin student Fang Shih-Yu (Alexander Fu Sheng) into believing that Hung is a bloodthirsty robber and murderer. It seems like the two men would know each other, both being students of Shaolin, but Fang studied at a temple in a different region and at this time had only known Hung by name. It’s also worthwhile to note that Fang Shih-Yu is none other than noted folk hero Fong Sai-Yuk, who I first learned about through the pair of Jet Li films in the ’90s (as I imagine a lot of people my age did).

The film was the first of Chang Cheh’s “Shaolin Cycle,” an informal title given to the group of Shaolin-focused films Chang made during 1974–1976 with his offshoot production company based in Taiwan, Chang’s Film Co. As far as I’m aware, Heroes Two was also the debut of the iconic and much-loved animal hand shapes that defined the kung fu genre for many years. Oh, and it was the starring debut of Shaw superstar Alexander Fu Sheng, and the first Shaw film (and perhaps THE first film) to feature credits over martial arts displays in front of colored backgrounds (one of my favorite kung fu movie staples). Even just one of these firsts would make Heroes Two a landmark film, so to have all of it is truly a legendary achievement within the genre.

The battles are plentiful in Heroes Two, and while they’re all fun and well-choreographed, they aren’t nearly as intense as they could be with an emotional component (as they have in The Blood Brothers or The Pirate). We merely watch good guys battle bad guys, but we rarely know much about either side. It’s fine because the choreography and the sheer charm of the leads command your attention, but the battles are rarely tense because of this. Unique aspects do emerge from this barrage of fists and kicks, though, and specific flashes of style inject a healthy dose of visceral emotion into their respective scenes, helping to offset the lack of narrative emotion.

A fight in a cellar dungeon is quite memorable thanks to the standard Shaw sound effects carrying an echoing effect to convey the confined quarters of the fight. This is also the first encounter between Fang and the lead villain General Che Kang (Chu Mu), whose strikes are so powerful that when a full-powered blow lands, it is punctuated by a freeze frame of Fu Sheng twisted in pain. The freeze frames force you to reckon with the power of the strike, as the only way to illustrate the force to the audience is to have it affect the natural, well-understood format of the film itself, causing everything to instantly freeze.

In the impressively staged and performed finale, Chang chooses to accentuate some of the deaths by tinting the screen red directly following a decisive blow, lending power and pathos to the characters’ deaths. We don’t even know who most of these guys are during these segments, but the red-tinted deaths of the Shaolin students causes us to consider each one an important loss to the threatened and dwindling numbers of the students of Shaolin. These tints are used exclusively for Shaolin deaths, while villains occasionally receive instances of bright, fully red frames at key moments, perhaps meant to represent the furious vengeance of the Shaolin warriors exacting their revenge. The individual deaths of the Manchu don’t matter to the heroes, and therefore they don’t matter to us. What matters is the anger and the bloodletting, causing us to literally see red in these moments. Chang Cheh largely avoids his old habit of drenching everyone in blood with this tactic, which will definitely disappoint the genre fans, but I really enjoyed these instances of Chang’s artistic and creative flourishes.

I can’t deny that Heroes Two is a little weak in terms of story and emotional connection, but it more than makes up for this by finally taking the genre into the realm of presenting true kung fu on-screen. You can see shades of this shift throughout the Shaw films of 1973, especially in The Pirate and other films choreographed by Lau Kar-Leung and Tang Chia, but those felt almost like proof-of-concept trials for the fully unleashed Heroes Two. I love this movie immensely, and as you might expect, it carries my highest recommendation.

Next up in this chronological journey through the Shaw Brothers Martial Arts catalog is Chang Cheh’s The Savage Five! Two Chang Cheh films in a row, now that’s a treat! See ya then!