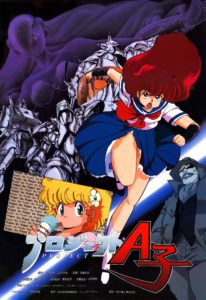 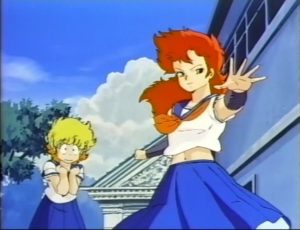 This is why so many live-action anime adaptations fail miserably. They cannot replicate what is easily done in animation, and they often wind up looking dumb when they try. It’s like trying to make a live action Tom & Jerry. You know that shit is gonna stink (and that someday Hollywood is going to be stupid enough to try it anyway). And it’s the exaggeration and absurdity that Project A-ko is all about, even if it isn’t as extreme as more recent titles like Redline or Panty & Stocking. The anime industry has changed a lot in three decades, and now Project A-ko feels almost sedate compared to its weirder descendants.

The film started life as a porno flick that somehow snowballed into a bizarre and convoluted story about superpowers, robots, and alien invasions. The pornographic aspect kinda fell by the wayside and was quickly abandoned. I get the feeling that creative control was pretty much nonexistent on Project A-ko. The director commentary track makes the production sound like a frat party where everyone was drawing animation cells instead of chugging beer. He states that tons of visual gags were inserted into the animation without the writers or directors even knowing about it, such as missile launchers that shoot beer cans and a ludicrous number of panty shots. But rather than turning the film into an incoherent mess, that playful exuberance just winds up shining through into the film itself, filling it with a joy and excitement that is hard to replicate. 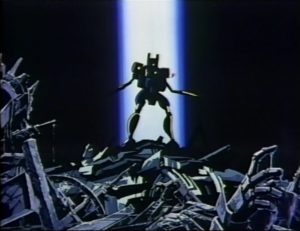 In the end, the film became a sci-fi/action/comedy/high school drama. It’s been years since I last saw this film, well before I started doing these reviews, and this time around I wasn’t laughing out loud as much as I used to. But everyone knows a joke isn’t as funny the second time you hear it, and when you’ve heard it over a dozen times before, as I have with this film, it really isn’t something you can laugh at any more. So don’t let that seem like a detraction to the film’s humor; it’s still good enough that I kept grinning for the entire runtime and frequently let out a hearty chuckle at the things I only half-remembered.

What surprised me the most this time around was realizing just how much of a slow buildup this movie has. The first thing that comes to mind when I think of Project A-ko is its high-octane action scenes, but those don’t actually come into play until the second half of the film. The first half slowly builds up the characters and the situations, so that when the action finally does cut loose it makes for a great payoff to situations we’ve actually developed an interest in. 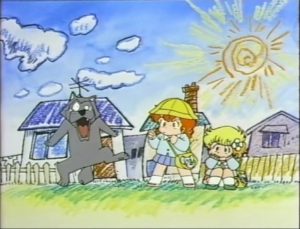 But the film really doesn’t focus on the sexual aspects, no matter how much they may permeate the story. Instead, Project A-ko focuses on A-ko’s superhuman strength and speed, which at first seems like just a simple visual gag, but gradually grows into one of the more important aspects of the plot. This slow buildup coordinates well with the way the film builds up the characters’ conflict as well. If the film had shoved everything in your face right at the start, it would have quickly become exhausting. But as an ever increasing realization, it works wonders to sustain the pacing and keep things interesting. 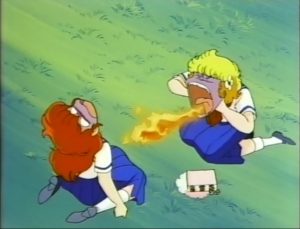 A-ko isn’t the only superpowered character either. B-ko can design and construct giant robots literally overnight. C-ko, if you can even call it a power, is so adorable that everyone seems to love her. The girls are also being followed around by a creepy alien spy named D who seems to be indestructible in a Wile E. Coyote kind of way. D is scouting around to find an alien princess that crash-landed on Earth 16 years ago as an infant. And then there’s Mari, a female parody of Kenshiro from Fist of the North Star who, unsurprisingly, appears to have all the powers of Kenshiro.

The film is a smorgasbord of parodies about anything related to anime at the time. Macross and Captain Harlock are perhaps the two most prominent, and there are tons more to go along with them. But despite all the anime in-jokes, they are so silly and obvious that you don’t really need to be familiar with the source material to get most of them. 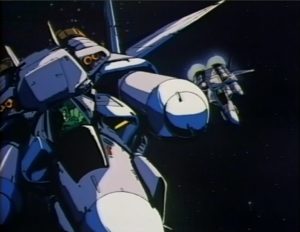 What’s most impressive about the parodies, though, is how good they play as straight action scenes. Even though the whole film is one giant joke about space battles and heroic showdowns, the action scenes themselves are every bit as well made, if not better, than the shows and films they parody. The action isn’t just funny; it’s thrilling and visceral, too. Once the alien invasion kicks off, it’s pure delightful mayhem and carnage until the credits start rolling. A-ko’s epic duel with B-ko is one of the highlights of the film, ranking quite high on the list of greatest fight scenes in anime. And the synth rock soundtrack is perfect at keeping the excitement amped up throughout the film.

The animation is also fantastic, capturing aerial dogfights and martial arts mayhem with equal skill. The commentary track mentions how much work it took to animate A-ko running, and how hard it was to figure out how to make her stride match the distance she moves while still looking natural. All that effort paid off beautifully. Every time A-ko dashes around the screen, it carries a dynamic energy that makes the scene come alive. 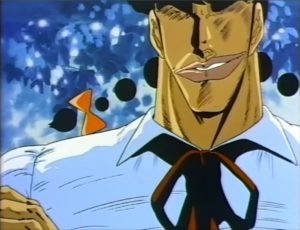 All of this by itself would have made Project A-ko an amazing film, but there’s even more to its impact on the industry. It was one of the first anime films in many years that was not based upon a pre-existing story. It destroyed the industry wisdom at the time that only adaptation films were worth the risk of financing. A-ko was not only successful, but phenomenally so, and as such it helped pave the way for more original films to be made. Just a few months later it would be joined by Studio Ghibli’s very first film, Laputa: the Castle in the Sky. And 1987 would bring Gainax’s very first film, Royal Space Force: Wings of Honneamise.

The fact that it wasn’t an adaptation is part of why Project A-ko is so well paced. It had enough room to breathe life into its world and characters in a way that most films of that era couldn’t do, such as Harmageddon, another film that A-ko briefly parodies. Original anime films, like most of Mamoru Hosoda’s and Makoto Shinkai’s output, are much more likely to have a well-told story, and I wonder just how many of those we would’ve gotten if Project A-ko hadn’t paved the way for them 30 years ago. (Or maybe Castle in the Sky would have had the same effect, but this is A-ko’s birthday; stop trying to steal her thunder!) 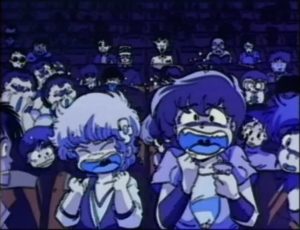 If there is a problem to be found anywhere, it would have to be C-ko’s voice. If you’re turned off by the super obnoxious hyperactive whiny girl archetype, then C-ko could easily get on your nerves. I don’t think she’s as annoying as some of the other ditzy girls I’ve seen in anime, but I’m a bit desensitized to the whole phenomenon, so take that with a grain of salt.

But while the film itself is near flawless, its legacy is a bit more questionable. Project A-ko is also heavily responsible for the popularity of ecchi anime (what TV Tropes refers to as “panty fighters”), a genre (“style” might be a better term) that I tend to think of as porn for 14 year olds. They often feature no nudity, no excitement, no character development, but lots of well-endowed women in tight shirts and short skirts. (Agent Aika probably being the most notable one to follow in A-ko‘s wake.) I usually criticize such works as having nothing more than incredibly boring stories and cheap titillation that could be easily found by a simple Google search instead. 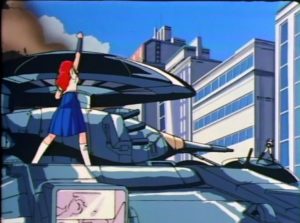 Like many genre starters, A-ko doesn’t really resemble the later titles it helped create. Yes, Project A-ko has a literal butt-load of up-skirt shots, but in an ecchi anime, that’s all there is. The camera shows nothing else unless it absolutely has to. In A-ko, all the panty shots are slipped in as hidden jokes whenever the animators could make them fit within the already established framing of the shot. Does that make Project A-ko less perverted? Of course not, but it does make A-ko focused on advancing the story in the most effective and entertaining way possible, rather than wallowing in boredom and low-quality masturbation fuel. However, such shows are still a major part of the anime industry, and for better or worse Project A-ko helped kick it all off.

But whatever may have spawned in its wake, A-ko is easily one of the best anime comedies ever made. Even after 30 years of new titles, I can’t think of anything that definitively surpasses Project A-ko. So if you have even a small interest in anime you should definitely track it down. And if you don’t wind up laughing your way through the film, then you should just avoid comedy anime all together ‘cuz it’s clearly not for you.