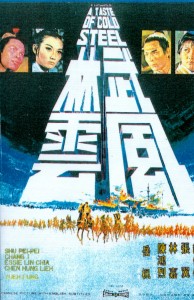 The other way it stands out from the crowd is that it’s probably 50+ minutes of action in a 78 minute film. Even for an action film that’s a high ratio, and for a Shaw Brothers film of this vintage it’s a rarity. Brothers Five definitely had more—and better—fights, but it was also a lot longer than this. In any case, fights! Lot of fights! Most of them are rather unremarkable, featuring the large-scale flailing seen in many of the multi-combatant fights of the era. The camerawork is especially inspired, though, creating a tight, visceral experience that really deserves better choreography. My favorite shots were the ones where it would start normal, but as the action escalated the camera would quickly tilt into a harsh dutch angle. It’s basically the equivalent to the signature Shaw Brothers snap zoom but with angles, so I’ll call it a snap tilt.

There’s a lot to like here, but it just doesn’t have the oomph necessary to make it anything more than a slightly better than average “awesome sword” movie. The cast is rich and performs admirably, especially the Five Tiger bandits played by Wong Chung-Shun (Fierce Tiger), Ku Feng (One-Eyed Tiger), Wu Ma (Sick Tiger, a hunchback), Hung Lau (Drunken Tiger), and the film’s choreographer Simon Chui Yee-Ang (Crippled Tiger). They’re all exaggerated, interesting characters, and they brighten up the film considerably. I’m always down for Ku Feng to kick some ass, and seeing him wield a whip while sporting a silver eye patch is worth the price of admission alone. The bandits get a lot of screen-time too, which is fantastic given their over-the-top nature.

But all of these fun elements do not necessarily make for a great film, and A Taste of Cold Steel is merely a fun, better-than-average film. I greatly enjoyed watching it, and it felt good to get back to the Shaw Brothers series after a month of horror, but I can’t help but be a bit disappointed. I still hold out hope that Griffin Yueh Feng has another fantastic cinematic gem hiding down the line in the Shaw filmography. While this was a distinct improvement over his previous film The Golden Knight, A Taste of Cold Steel is definitely not that gem. This is one only for the hardcore fans, as it takes some forgiveness to truly enjoy this film completely.

No trailer, but here’s one of the fights.

Next up in this chronological jaunt through the Shaw Brothers Martial Arts catalog is Cheng Chang Ho’s Valley of the Fangs! Hopefully it can live up to that great title.