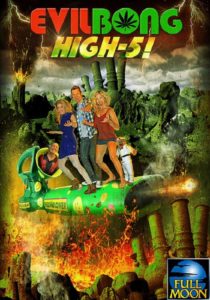 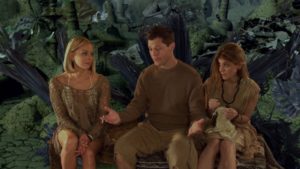 This non-existent plotting and the budget-friendly locations might suggest that Evil Bong: High 5 has bad writing overall, but its saving grace is in the film’s dialogue. A lot of creativity went into crafting some of these lines. I laughed out loud multiple times at the cleverness of the gibes and insults, particularly the ones thrown around by Jacob Witkin’s character, Grandpa. He’s a cranky old bastard and he rips his grandson Larnell a new one with cutting barbs such as, “You look like something a raccoon shat out after Halloween.” How can you not appreciate a line like that? What makes it even better is how they bring it back around during the film’s closing moments.

And once again the Badass Dolls feature prominently in the film’s “plot,” with Hambo coming into the shop, doing his best to hawk them to Rabbit and Larnell. New to this incarnation — I think — is a web domain dedicated to the dolls. Oh goody! The one thing I did like about this chunk of the movie is how they brought the Crack Whore doll to life. Maybe she was in a previous movie and I just don’t remember, but I’m pretty sure she debuted here. Anyway, she’s mostly just there for looks and to be the butt of some jokes, but whenever she does get a line (which is unfortunately only like 2–3 times), the words just explode out of her mouth, everything running together. She can no longer converse normally, she’s reduced to these awkward, hilarious interjections. The redneck dudes she’s with talk almost non-stop, why couldn’t she spew forth at least a couple more lines? 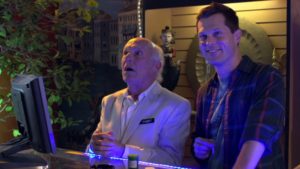 Evil Bong: High 5 received part of its funding through Full Moon’s recent Indiegogo campaign, and after seeing the film I wonder where this extra money went to bolster the production. It’s pretty much the standard Evil Bong movie, so it’s not like it’s anything too noticeable. What sticks out is how much better the store set looks compared to the ones in films past, even Larnell notices and comments on it! It’s also possible that without the extra dough there would’ve been less cameos, so because I love seeing David DeCoteau in these movies (or any movie, really) I’m going to choose to believe that’s where some of the money went. There’s also the possibility that they poured most of the money into Killjoy Psycho Circus, too. In any case, Evil Bong: High 5 is a nicer looking film than some of the previous Evil Bong movies, so that’s something.

Regardless of my problems, Evil Bong: High 5 is a fun watch for the modern Full Moon fan. The world of these films continues to expand and grow in weirder and weirder ways with each film. You almost have to watch the next film just to see what kind of weird shit they concocted this time around. But ultimately, I think taking a page out of Rabbit’s book will be the best course of action when it comes to this one. If you can empty your mind of all thought… if you can achieve true Nothing Head, then the nothingosity will guide you down the path of kush-laced, B-movie zen and into a state of Evil Bong euphoria.

Next time I get around to a Full Moon movie I’ll be putting out the review that I thought would come out before this one, but I pulled a fast one on myself… it’s Ragdoll! See ya then!