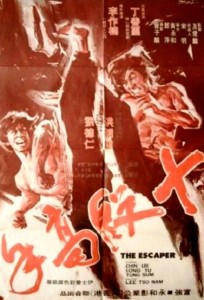 Outside the wall they meet up with an old woman, and by the looks of the encounter this was part of the plan. On their way home, the group runs into a man assaulting a woman, and naturally the heroes step in and kick his ass. The girl, thankful for her rescue, becomes a member of their traveling party and they all venture to a remote house set against a rocky group of mountains. As per the grand majority of mid-level kung fu movies, the thwarted villain tells his villain boss of his misfortune and then a gang of villain cronies descend upon Hero House.

Without the dialogue, I’m left to wonder why the film is titled The Escaper when the escaping is done in the opening few minutes, and it’s done with the help of a guard (that as far as I could tell never returned to the film). What’s even more bewildering is that the badass guard with the whip shows up about an hour into the movie, and he’s on the side of the heroes! Did he stop their first escape attempt merely to move them to a different cell where his buddy could give them the rope basket? The world may never know.

Through the unfailing marvels of Google Translate I can tell you that the Chinese title of the film is different. It translates as Ten-Segmented Master or Ten-Sectioned Master. A much cooler title to say the least! I’m guessing it refers to the big boss villain that comes around towards the end and pulls out a roughly ten-sectioned whip chain. I’m guessing he trained or otherwise wronged the whip guy, but why he’s actually significant (other than being the big boss) is only for the native Chinese speakers to know. But it’s interesting to note that the film is titled after him in a similar way to Lo Wei’s The Big Boss… and that this film’s star bears a surprising resemblance to Bruce Lee. I’m not entirely sure when the first Bruce Lee clone film came out, but I do know that The Escaper was released a month before Bruce died, so there’s a chance that this was one of the first, if not the first. This is the first time I remember seeing a whip chain while watching films for this chronological Shaw Brothers series, too.

In terms of the action, The Escaper fares pretty well. This is going to sound weird, but I actually thought there was too much! What I mean is that there was too much without enough variation. By the end of the film I was kind of checked out, even though the last 15 or so minutes is pretty constant action, and in that section it does go through a few different variations. There’s just too much “normal” fighting before we get to the “staffs in the river” part, or the “two leads against the big boss… and now he has a whip chain” finale. What forgives a lot of this mediocrity is that the lead actors (Hung Chiu-Hung & Lau Tak-Yan) perform the moves admirably and are obviously actual martial artists, something that adds considerably to the allure of a martial arts film. The film’s HKMDB entry contained an image from a magazine article which states that Hung Chiu-Hung was a captain of the Chinese Judo team at the Olympics (this would explain some of the throws mixed into the choreography), and Lau Tak-Yan was a champion of both Kung Fu and Wrestling. Neither of them made many other films, but Hung Chiu-Hung could have definitely had a career as a Bruce clone!

The Escaper was director Lee Tso-Nam’s third film, and he later went on to make a shitload of well-regarded kung fu films and such genre classics as The Hot, the Cool and the Vicious, The Tattoo Connection and even some Bruce Lee clones like Exit the Dragon, Enter the Tiger and Chinese Connection 2. The Escaper feels like a test run for stuff like that, and if that’s your thing (and if you’re reading this, it probably is), the The Escaper is a worthwhile watch. It’s nothing great, but fans of Lee Tso-Nam, Bruce Lee clones and the early ’70s kung fu will find much to like here (even if it’s still kinda mediocre). Provided you can find a copy, of course.

Next up in this chronological journey through the Shaw Brothers Martial Arts catalog is the Chang Cheh & Ulysses Au-Yeung Jun film Police Force! See ya then!