> Extras > Hey Look at This! – Celluloid Wizards in the Video Wasteland

Celluloid Wizards in the Video Wasteland is a documentary about Empire International, one of my favorite ’80s B-Movie studios, and it’s currently looking for some funding on Kickstarter. In general I’m not one to write posts about Kickstarters (I’d have A LOT to write about if I was!), but in this case I felt like it was my duty. As you may be aware, I’m years deep into a review series of the entire Empire International/Full Moon/Charles Band catalog. So naturally when a documentary is proposed, focused specifically on the most cinematically interesting period of Band’s career, I’m interested. Oh, and it has “never-before-seen footage, production stills, and rare glimpses at the motion pictures that were in development when the studio was dramatically seized by the bank”? Sounds fantastic!

The Empire years were home to some of the best films that Charles Band had a hand in making, including classics like Re-Animator, Troll and Trancers, as well as lesser-known Silver Emulsion favorites like Ghoulies 1 & 2, Ghost Warrior and Robot Jox. Producing a plethora of varied, imaginative films in just a few years, Empire ended up going bankrupt while still in production on many films. This led directly into the creation of Full Moon at the dawn of the direct-to-video market, as a last chance effort by Band to save his company. These years are ripe with great films, and I imagine the stories about making them are just as great. I mean, as a fan of FX work how can you not get excited by this rare shot from behind-the-scenes of Stuart Gordon’s From Beyond! 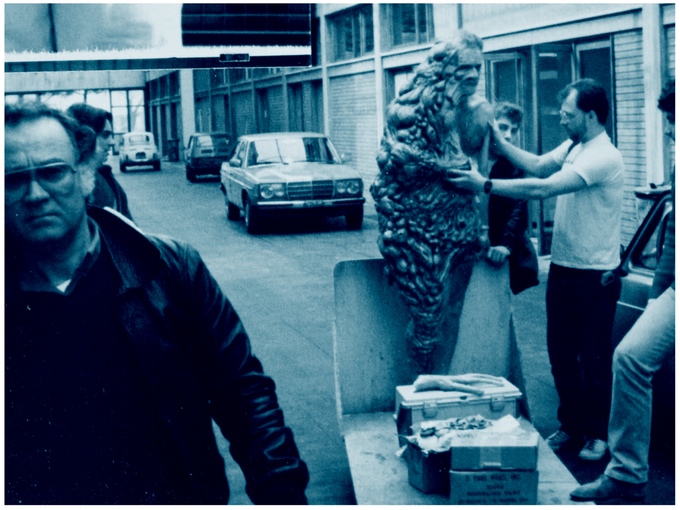 I’m specifically interested in the company’s implosion, and I have high hopes that Celluloid Wizards in the Video Wasteland can shed some light on exactly what happened and why. I’ve heard it was due to the ever-growing budget for the amazing stop-motion and FX work on Robot Jox, but I have my doubts that this was the only factor. There were also many films announced, or cancelled somewhere along the line in production that I hope to hear more about, too.

So what are you waiting for? Check out the Celluloid Wizards in the Video Wasteland Kickstarter!

2 thoughts on “Hey Look at This! – Celluloid Wizards in the Video Wasteland”