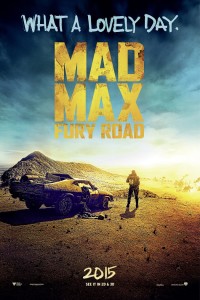 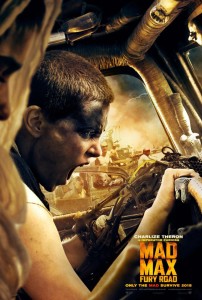 Mad Max: Fury Road is everything Mad Max was all about in the three previous films, now turned up to 1000. Even the super loud music returns (and I mean this in the best way possible)! It succeeds by throwing us into the wasteland and presenting a detailed, richly visual world full of insane characters worthy of your attention. The cars and stunts are all largely practical as well, giving moviegoers a visceral feeling that has been lacking from cinemas for far too long. Mad Max: Fury Road has the “Oh shit, how’d they do that?” factor; when’s the last time a CG-era movie had that? The modern action movie was in desperate need of a shot in the arm, and Mad Max: Fury Road rocketed out of the Australian desert like a gasoline-and-heavy-metal-infused speedball to explode the genre wide open.

Like the two previous sequels, Mad Max: Fury Road does not outwardly state where it fits in the timeline of Miller’s wasteland tales, it just dumps you into the world and lets you figure it out. Since it’s been 30 years since the last ride for Max the timelines don’t line up perfectly, but they never really did and it never really mattered. I was initially convinced that Fury Road was intended to be between Road Warrior and Thunderdome, but I’m now positive that it’s a few (or many) years after Thunderdome.

What initially made me think it was between 2 & 3 was that Max begins Fury Road with his car, and the car is long gone by the time Thunderdome rolls around. He also wears the leg brace in Fury Road, which I’m pretty positive is also missing from Thunderdome. The other thing that stuck out is that the Keeper of the Seeds says that nothing she planted has taken root yet, but the kids in Thunderdome are living in a lush oasis. From what I understand the nuclear war in this world occurred between Road Warrior and Thunderdome, though, so the advanced state of the genetic mutation and the offhand references to “perfect” babies being unique and prized make it clear that this is an advancement of any previous version of the wasteland we’ve seen. In terms of Max looking old enough for this to make sense, it definitely doesn’t hold up, but whatever. I love that these films are all tales of Max in the wasteland, loosely connected but not directly. Since Max is more of a cipher than a fleshed-out character, it just matters that he’s there, not that everything adds up perfectly. 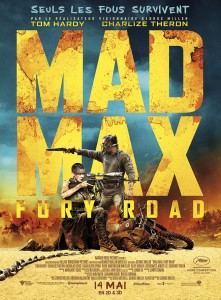 This reminds me of Max’s flashbacks in Fury Road, and how they are seemingly unrelated to anything we’ve seen previously in the series. Max is haunted by a girl who he could not save, as well as a few others that come and go in his dreams. I don’t think these visions are intended to be a vague, revised version of Max’s origin in Mad Max, instead I took them as another tale of the wasteland that we just aren’t privy to. The films jump in and out of different periods in Max’s journey and teach us that Max often finds himself in these perilous situations. So while the films depict the ones where he was able to triumph, there had to have been skirmishes that went poorly, and I saw these visions as a culmination of these times. Living in the wasteland for decades at this point, Max is broken and untethered. The years of living in survival mode are catching up with him. He’s done his best to develop no real attachments to anyone over the years, having been burned brutally in his past (see: Mad Max), but clearly this ghostly little girl was one that got under his skin. Miller has announced that the next film he has written is a prequel, and while I think this kind of thing is better left mysterious, I won’t be completely surprised if this girl figures in.

Over the course of my Mad Max reviews one of the things I haven’t touched on is the series’ design work. In the first film it’s the police cars that stand out, Road Warrior has all the crazy bandit shit, and in Thunderdome I think Barter Town delivers a great look at a town built by bandits and scavengers. Fury Road completely and utterly blows them all away on all fronts: cars, bandits and towns. George Miller’s ability to deliver visually driven characters soars in Fury Road. Immortan Joe’s skull teeth and breathing tubes? Instant BAD ASS that shoots to the top of movie villain lists everywhere. He is the ultimate asshole; he might do a lot of things, but fuck around is not one of them. The midget guy? The dude blasting out heavy guitar riffs no matter what happens around him, on a car strapped high with amps and drummers? The robber-baron leader of Gas Town with the fucked-up nose? I could go on because the film is FILLED with these kinds of guys, and they are all incredible. 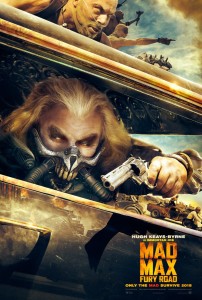 In a broader sense, Fury Road offers another look at a society/town built by bandits. Barter Town in Thunderdome seems built up on old-world ideas (perhaps they were nostalgic bandits who liked the lifestyle but wanted a bit more stability), but Immortan Joe’s Citadel in Fury Road is a very different beast. The Citadel is a society/town that flourishes because it completely embraces living the guzzoline-crazed bandit lifestyle to its absolute fullest. These guys would eat the dudes from Road Warrior alive without even breaking a sweat; that’s how on top of their game they are. Their entire society reflects this love and dependence on vehicles; the cars are characters all their own, as are the steering wheels and just about everything else in this world. The detail is astounding and visually arresting. Mad Max: Fury Road is such a visual experience that it could easily be understandable as a silent film; its world-building is almost all visual, letting moviegoers experience the wasteland instead of being told about the wasteland. It’s fantastic. It shares this quality with the previous Mad Max films, but like I said before, here it’s turned WAY up.

Max is once again in-between two rival factions, too: the Immortan Joe nutjobs (with additional gonzo motherfuckers courtesy of Gas Town and the Bullet Farm), and the women of the wasteland led by the incredible and truly awesome Furiosa (Charlize Theron). Immortan Joe is a force of destruction (whether that’s literal destruction or a more figurative “destruction of other lives through oppression” sort of thing) and his goal is simply more power. The women are also a force of destruction, although their methods are wildly different. The women blame Joe (and basically all men) for causing the world’s end, so they hope to destroy/overthrow the patriarchal ways that ruled the world even before the wasteland (and then in turn breathe fresh life into the wasteland). In the previous films the side of good generally hung their hope on resurrecting something remembered from the pre-apocalypse world, but the women of Fury Road want no part of that.

Mad Max: Fury Road is so goddamned good. Abso-fuckin’-lutely incredible. Seriously, if you love movies, specifically action movies, it’s one of the greatest movies ever made. George Miller, at 70 years old, shows everyone how it’s done. Best Everything of 2015.