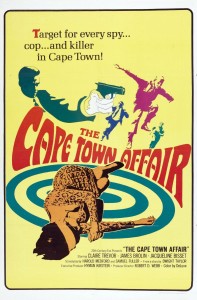 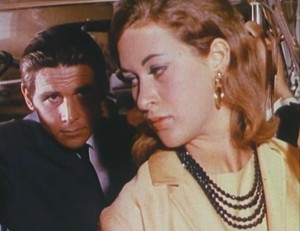 By using the almost the exact same script, the two films offer up the same scenes with minor differences. If you’ve seen Pickup on South Street it will be virtually impossible not to constantly compare the two films because they’re nearly identical. Except where it matters. In many ways, The Cape Town Affair would’ve been a better movie if they had just gone with a shot-for-shot remake. It’s already a pointless remake as it is, might as well go whole-hog and just make the best movie you can — or not, they really didn’t have to make this! Anyway, as the films stand, they give us a great study in editing. On one hand we have a tight, nicely edited version, and on the other we have a lazy, slower, less cinematic version. I’ll just leave it open for you to decide which film fits which role. The most glaring instance of this can be seen when Joey confronts Candy late in the film.

I’m still hung up on trying to explain how strange of an experience it is to watch The Cape Town Affair if you’ve seen Pickup on South Street. For one, the 1950s words and the 1960s pictures don’t match up, but it’s more than that. There’s a feeling like you’re looking at a painting that’s been painted over another painting of the same thing, but you can still see the original through the newer paint. Does that even make sense? Hmm… imagine the film A Scanner Darkly, where live-action footage was shot and then later rotoscoped to make the film into something of a hybrid animated movie. You know you’re watching live-action footage, but it’s through the prism of animation. The Cape Town Affair is exactly like that. It feels like watching a 1950s B&W noir thriller with an overlay of 1960s color, with all the energy, bite and thrill filtered out and a bouncy ’60s jazz score on top. Boooooo! It’s truly one of the oddest movie-watching experiences I’ve ever had. 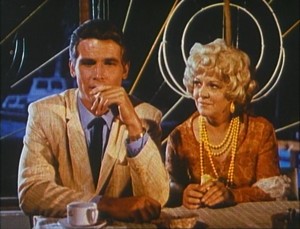 And it somehow manages to be about 20 minutes longer than Pickup on South Street! Without examining the two films frame-by-frame — the horror! — it’s unclear exactly what constitutes that extra time, although I did notice two fairly “major” differences. The first is that instead of Skip examining the microfilm at the New York Public Library, he now visits a shop owner with a basement of stolen goods in order to borrow an 8mm projector for a few minutes. This scene also shoehorns a street kid character in, which may or may not be a slight homage to the recurring street kids in Fuller’s films. The other big difference I noticed was directly after the Joey/Candy confrontation. In Pickup, Joey jumps in the dumbwaiter and escapes the cops, in Cape Town the scene is an attempt at a tense action scene, and much more protracted.

Whatever… I’m done with this movie. Hopefully with time I can forget it exists. If you’ve seen Pickup on South Street and you’re feeling curious about The Cape Town Affair, stop yourself and just re-watch the Fuller original. And if you’ve never seen the original… well, you know what to do.

The Cape Town Affair is in the public domain, so here’s the whole movie if you decide to watch it for some godforsaken reason.