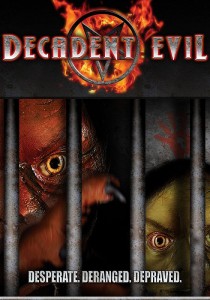 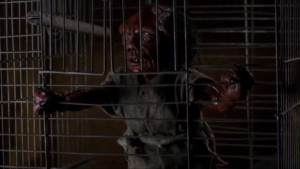 As I mentioned, Decadent Evil is a vampire film, something that took me by surprise as I thought it was going to be another in Band’s long line of puppet/doll/small creature movies. Instead they actually frame this story as an offshoot from the earlier film Vampire Journals, which I guess tangentially makes it within the Subspecies universe. These vampires can’t hold a candle to Radu, but they’ll have to do. They are far more attractive than Radu and his perennial bloody chin, if nothing else. Anyway, the connection to Vampire Journals is incredibly shaky and unnecessary, only existing as a way to shoehorn 10 minutes of stock footage into the movie. If anything, the backstory of the homunculus that we’re told as the film progresses would’ve made for a great intro to the tale, although that would also arguably make the movie even more cliche-ridden (not to mention inflate that half-a-shoestring budget).

I’m dancing around the plot because if I get caught trying to describe it for too long, I’ll have given everything away in a very small amount of words. Besides, you already know this one: vampires are preying on humans, and someone rises to stop them. What you wanted more plot after having an entire movie condensed to 10 minutes during the intro? Too bad. But Decadent Evil is not all simple cliche — this is a Charles Band movie after all — so our lead vampire, Morella (Debra Mayer), keeps a pet homunculus in a bird cage, providing me with lots of laughs as Band repeatedly cut back to the red-faced puppet for reaction shots. 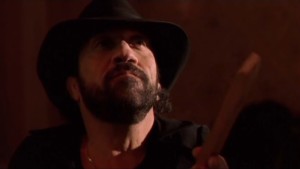 Even considering how much enjoyment the homunculus provided me, the high point of the film was Phil Fondacaro. I’ll admit that a fair amount of my enjoyment of his role came from my already built-in fandom for the actor, but he is also hands down the best actor in the film. And his role has to be one of the most hilariously absurd characters I’ve seen in a B-Movie in a while. The budget hinders the film from ever realizing the character’s full potential, but Fondacaro still manages to infuse a great spirit into the role. OK, I can’t hold it in any longer: he plays a Van Helsing-style vampire hunter! Given Fondacaro’s stature this makes his battles with the vampires rather amusing.

If you can make it through the opening section, Decadent Evil is a pretty entertaining B-vampire movie. It actually wasn’t quite as trashy as I expected it to be; nudity was noticeably light for a modern Band film… especially one with strip club scenes. What it lacks in engaging story, it makes up for with a spirit of fun and a healthy amount of laughs. Don’t believe me? After Decadent Evil, you’ll never be able to call yourself “Studboy” again without crackin’ a smile. Sucks to be you, Studboy.

Decadent Evil is available on DVD or through Full Moon Streaming!

Next time I get around to a Full Moon movie, I’ll be checking out this film’s sequel, Charles Band’s Decadent Evil 2 from 2007! Hopefully the homunculus brings some little friends along for that one! See ya then!