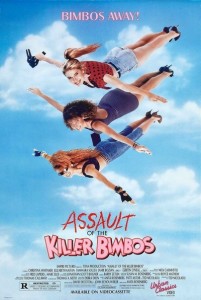 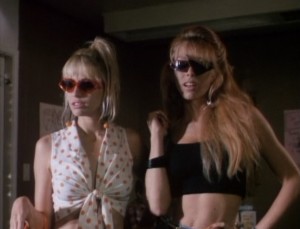 So on the run to Mexico they go, with nothing but the dumbest of hijinks along for the ride. If it’s not clear by the ridiculous title, Assault of the Killer Bimbos is in fact a comedy. I won’t say it’s an especially effective comedy, but any film that casts Eddie Deezen as a sheriff’s deputy is clearly doing a few things right. Lulu’s jungle bikini with all kinds of plastic fruit glued to it was another nice stroke. The real problem with the comedy is that much of it merely amuses; it’s funny enough to keep you watching, but big laughs are hard to find. But comedy is probably the most subjective of genres, so your laughs may vary. I do get the feeling that there has to be an ardent group of fans out there that LOVE this one.

The most interesting aspect of Assault of the Killer Bimbos is that it was directed by a woman, Anita Rosenberg. It’s fairly rare to see female directors in B-Movies, and probably rarer still in B-Movies that feel so firmly aimed directly at the male T & A comedy market. Rosenberg definitely does her part to cater to that audience too, filling the film with lots of “fan service” shots of said T & A (but mostly A). Full Moon films like this feel like predecessors to their later crop of full-on softcore films, many of which Bimbos lead Elizabeth Kaitan would go on to star in, including their first feature Virtual Encounters.

Anyway before I get too far off track, I found it interesting that a female director would include such leering shots, but I suppose if it’s your first movie, and it’s a B-Movie, you’re kinda locked in with what you can do. I will say that the girls feel like much more than just dumb movie bimbos, almost to the point of the film taking on something of a “girls against the world” feminist vibe. So yeah, this is kinda like Thelma & Louise if Thelma & Louise was a wacky comedy and had ended on a Mexican beach, three years before Thelma & Louise.

I’d also be remiss not to mention the fun car chase through the desert that ends with an AMAZING police car flip that could have easily become the Full Moon answer to the Troma Car Flip. But cool flipping cars aside, the most defining aspect of Assault of the Killer Bimbos is that it’s just kinda middle of the road. It’s more mildly amusing than anything else, so it all ended up leaving me rather indifferent. They tease a sequel at the end — Bimbo Barbeque — but I’m not surprised it never got made. Assault of the Killer Bimbos is just too mediocre to garner the interest necessary to warrant a sequel.

Next time I get around to a Full Moon movie, I’ll be checking out Charles Band’s Decadent Evil from 2005! Let’s see if it’s as trashy as I expect it to be. See ya then!