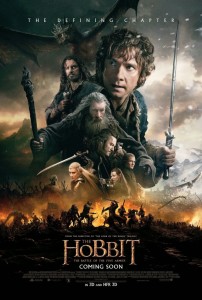 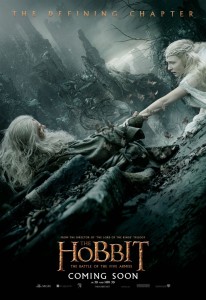 Perhaps the greatest scene in the entire film, though, is one that recalls Lord of the Rings the most. In Desolation of Smaug, Gandalf is left in a cage in Dol Guldur, prisoner of the necromancing shadow reforming into the Dark Lord Sauron. Since Gandalf shows up at the end of the novel — and in Lord of the Rings, for that matter — you know he will make it out alive. But it’s all in the “how” of the thing that makes it so outstanding. I’m not well-versed on Tolkien’s appendices, so I’m unsure how much of this scene I’m being vague about is Tolkien and how much is Jackson, but I do know that the end result is absolutely amazing. And this is exactly the kind of thing that would have been completely excised if the film held true to only what is written in The Hobbit.

By including material from the appendices, specifically what Gandalf gets up to while Bilbo and the dwarves venture onward, The Hobbit trilogy is able to become the prequel it needed to be to the Lord of the Rings films. Yes, “needed.” With a specific focus on only telling the novel’s story, The Hobbit films would seem largely unrelated to the previous version of Middle Earth and even more tonally different from Lord of the Rings than they already are. With an established screen version of the universe already in place, Jackson and everyone involved would be a little daft not to at least make use of it, if not expand upon it. By delving into Tolkien’s appendices the authenticity is there as well. And besides, without these sections can you imagine the current crop of nitpicky reviewers not finding fault with Gandalf leaving the party at towards the beginning of Desolation and only coming back partway through Battle of the Five Armies? 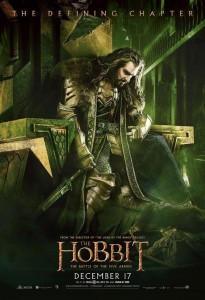 This might just be my perception, but the CG work looked incredible. A lot better than the previous films even. Either that, or this is a strange side effect of re-watching the first two films recently on DVD, and then experiencing the third film in its intended 48fps 3D. Whatever it is, every frame looked FANTASTIC. I feel bad for the clean-up crew that had to mop up the huge puddle of drool around my seat. I think I’m one of the few that actually likes 48fps, or at least find it incredibly interesting. Coupled with the 3D, there are times when 48fps looks more like you’re on set with the characters instead of watching them in a movie. For instance, depending on camera placement and focusing and such, Tauriel sometimes looks more like a cosplayer than an actual movie elf. This “reality” is both off-putting and highly immersive. What’s most disconcerting are the shots where it looks more like real life, but yet there is some camera depth of field or focusing that the human eye is incapable of. It kinda fucks with your brain a bit. 48fps is also supposedly the reason Peter Jackson had to ditch force perspective shots, scale models and some other practical FX (which feels odd to note here as it felt like Battle of the Five Armies contained more built sets and practical FX work than either of the previous Hobbit films). Anyway, I like 48fps. I don’t really care to see any other movies use the format, but the immersion of the 3D really is on a whole different level. And I don’t care at all about seeing movies in 3D.

It’s probably unnecessary to say at this point, but I loved The Battle of the Five Armies. I’m sorry for anyone that can’t have fun with it because the Hobbit films, especially this latest one, are the kind of fantasy filmmaking that fans have dreamed unsuccessfully of for years. Upon my first viewing of the concluding chapter of Lord of the Rings, I hoped that the trilogy’s success would lead Hollywood down similar paths, greenlighting lots of exciting high fantasy tales. It still has yet to happen, and at the end of Bilbo’s journey, 11 years later, I don’t hold any similar dreams. Thus, I savored every entertaining, high-fantasy minute of The Hobbit‘s “bloated” runtime, and it has left a huge smile on my face.