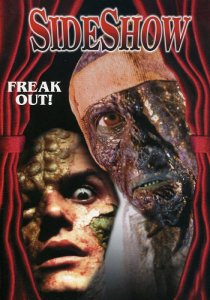 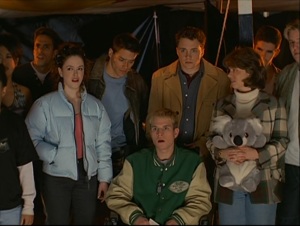 After the credits role, we meet the film’s main non-freak characters, AKA a bunch of sideshow attendees whose names I’m having a hard time recalling. You can’t honestly expect me to remember some regular ol’ Joe Schmo’s name when there’s someone like “Hans the Bug Boy” or “Digestina” around. Maybe if the regular folk had fun titles I could remember their names too, like Johnny the Dipshit, or Sally the “I Think I’m Soooooo Ugly” Girl. I do remember there was a Bobby, and a Melanie, but beyond that I would have to cheat and look at IMDB. But the key thing to take from this meandering paragraph about my failing memory for things that don’t matter, is just that. These people don’t matter.

Not in the “they’re just low-budget movie characters” kind of way either. No, these characters are mere one-dimensional cutouts of real people, defined by a single trait throughout the film. They don’t matter because the real stars of the film — the heroes even — are the members of the sideshow. I can’t say that everything the carnival performers do is especially valiant or legal, and they definitely aren’t persecuted and sympathetic like the monsters of Nightbreed, but there is a sense that they’re working from a sense of justice. It’s warped a little, but whose sense of justice isn’t? I never thought I’d look to the bible for review inspiration, but hey, let the one without sin cast the first stone.

Anyway, in a movie full of sideshow performers you’d either have to go the Freaks route and hire actual sideshow performers, or you’d have to turn to a makeup FX artist to deliver some creepy oddities of human anatomy. Full Moon chose the latter, allowing Gabe Bartalos, probably most famous for his work on the Basket Case films, to create a whole mess of great, freakish effects. The budget here may be low, but it would seem that a fair portion of that budget went to creating great looking, fun FX. The Inside-Out Girl was my favorite, topping even Hans the Bug Boy (who I thought was absolutely not to be topped when I first saw him). The performers are a strange assortment of characters (including one Kuato-style dude in a guy’s belly), but the FX work is skillful and excellent, something not all post-’90s Full Moon films can boast! 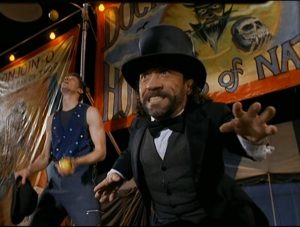 Beyond the entertaining FX work, the true star of the show is Phil Fondacaro. Never mind that I’m a huge fan, Fondacaro is pitch perfect in the role of Graves, the sideshow leader and barker. He doesn’t exhibit any freakish qualities other than his small stature, but his character is perhaps the scariest of them all. There’s something fun about seeing a Bug Boy remove the wrappings from his face to reveal fantastic makeup effects underneath, but Graves is behind no such masks. He confronts the “normal” characters with his wits and his words, gaining their trust one moment before sowing the seeds of fear the next.

For a film little more than 70 minutes, Sideshow features a fairly slow build, but it’s enjoyable as long as you like the odd fringe culture of the US, cool makeup fx, and characters you don’t care about. If you’re not interested in that kind of stuff, I wonder how you found yourself reading this far into the review. Perhaps you were abducted and you just woke up in a stark white room with nothing but a computer and this review on it. Maybe you found it on the high seas, printed out and rolled up in a little bottle. Whatever the case may be (I won’t judge), Sideshow is a fun diversion for a night’s B-Movie entertainment.

Next time I get around to a Full Moon movie, I’ll be checking out Anita Rosenberg’s Assault of the Killer Bimbos from 1988! See ya then!