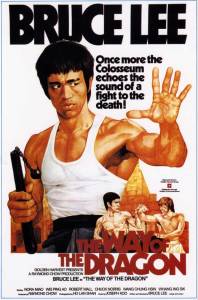 This is admirable, and a lot of the comedy in The Way of the Dragon still works fairly well, but (for me) it’s only when the film breaks free of this and gets serious that it truly shines. Unfortunately, that’s basically just the end fight with Chuck Norris… so it’s best to accept that it’s a light, by-the-numbers kung fu movie set in Italy and just have fun with it. I’ll probably do just that and enjoy it a lot more when I inevitably re-watch it, but this time was my first viewing in probably 10–15 years so I didn’t remember a lot going in.

When I call The Way of the Dragon “by the numbers,” I really mean it. The story of the restaurant under siege by thugs who want the owner to sign the business over to their boss is second only in kung fu films to the tale of the student who must avenge the death of his master. Having the film set in Italy is a wonderful choice, but ultimately it’s just “same shit, different country.” Bruce Lee the writer/director takes his time introducing the elements of this bare-bones story, but once everything is on the table pretty much every scene after that is a rehash of the thugs trying to take the restaurant and Bruce kicking their ass. The thugs just sequentially grow in number or in skill level with each scene (and the fight settings change, too), culminating in the aforementioned battle with the legitimate and not-just-an-Internet-meme badass, Chuck Norris.

But there’s one part of that repeating formula that basically makes it all OK. Need a hint? It’s the part where Bruce kicks all their asses. Over and over, and over again. With fists, with feet, with staff and nunchaku, Bruce Lee is an incredible force of martial prowess and watching him do his thing simply never gets old. I do think the choreography was a little better in Fist of Fury, and I don’t think the fights here — other than the exciting and iconic final battle, and the double nunchaku scene — are all that memorable. But like I said… Bruce is Bruce, and Bruce is always bad-fucking-ass. He even rips out a tuft of Norris’s chest hair! End of discussion!

The Way of the Dragon also features Ngai Ping-Ngo turning in a hilarious performance as the Big Boss’s lead henchman. Even if you’re lukewarm to Bruce Lee (yes, these people exist), Ngai’s flamboyant wardrobe choices are reason enough to watch the film. He’s like a Chinese Mr. Furley, and he brightens every scene he enters. He must have taken notes from all the modern-day films that David Chiang and Ti Lung made with Chang Cheh over at Shaw Brothers.

Also, I want to say that I’m fairly positive this is the earliest film I’ve seen that cites the real-world accomplishments of the film’s martial artists alongside their names in the opening titles. Y’know, like they used to do in all the shitty American martial arts movies of the ’80s and ’90s. What I’m thinking is that it all springs from this movie! If anyone has information otherwise, please let me know, but I like to think that it was Bruce’s influence that started one of my favorite things about dumb American martial arts films. … Well, I just watched the intro to the US release version (now streaming on Netflix) and the opening titles are completely different and do not feature the credits I just spent a paragraph talking about. So there goes my theory!

Next up in this chronological journey through the Shaw Brothers Martial Arts catalog: I’m going all the way back to 1966 as I mop up a few films that have become available since I started this thing. First up is Peter Pan Lei’s Downhill They Ride! See ya then! (Hopefully sooner rather than later.)