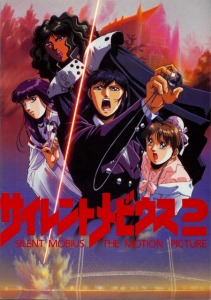 But as much as the movie does right, it never rises above average. It has a few cool moments, but nothing that made me really excited. At least they ditched all the weird tentacle innuendo, and that’s really what makes this film so much better. It’s amazing what you can do when you actually try to make a fight scene instead of a montage of tentacles groping at people. For the first time, I found myself kinda enjoying a Silent Möbius product. It might have made me want to watch the TV series if I didn’t already know how bad it is. So I find it strange that they never made a third film. They were clearly trying to, as the credits end with the line, “To be continued.” I guess all the fans of the first film were disappointed by the lack of tentacles and didn’t buy the second.

But while the action is a definite improvement, the story is still pretty wonky. As much as it tries to explain why Katsumi decided to join the police, it actually doesn’t do that. Katsumi spends the whole film griping about how much she hates the other members of the team, and especially the police chief who’s basically drafted her into the team. Then suddenly at the end Katsumi spontaneously decides everybody is her new BFF. I see what they wanted to do. They wanted to make a gradual shift in character perspectives that would bond the team together. The problem is they forgot the gradual part. The eventual team bonding comes out of nowhere, without any justification or credibility. So in the end the story doesn’t give any better an explanation for things than the first film did. 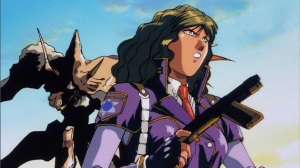 The film does slip in a bit more about Katsumi’s companions, though. Especially Yuki, who wasn’t even in the first film at all. Oddly enough, they give Yuki more of an explanation that any other character except Katsumi. In fact, I don’t remember her backstory ever being mentioned even in the TV series. But then again, as I mentioned in my review of the first film, that series was pretty damn forgettable. That little bit of backstory is pretty much summed up in about 30 seconds of dialog, so it doesn’t do a whole lot of explaining. And the other characters are still barely touched upon. You’re left to figure out for yourself that Kiddy is a cyborg. I’m not sure how confusing it would have been if that hadn’t been one of the few facts I did remember from the TV series. But as piddly as the character details are, they are still given more attention here than the previous film. Sad but true.

At least Silent Möbius 2 entertains on the most basic level, unlike its predecessor. Of course it’s so reliant upon the events of the first film that it’s probably not worth sitting through both of them just to get the moderate entertainment of part 2.