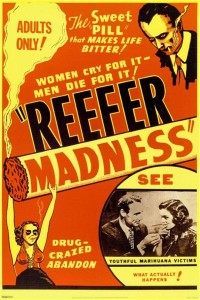 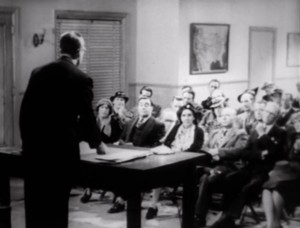 There we are introduced to the “cool” kids who hang out at a drug dealer’s apartment, smoke pot, dance and generally do whatever suits them in the moment. Inhibitions are lowered and laughter abounds. We also meet the good kids, who are on track for college and the productive life ahead of them, never even considering doing anything remotely bad. But when Bill Harper is trying to look cool in front of a cute girl, he agrees to go along with the bad kids to the drug dealer’s den of iniquity. And there, under that ever-present and powerful force known as peer pressure, Bill smokes his first joint. This, naturally, leads Bill to become a raging marijuana addict in no time flat, slacking off on his school work and completely forgetting his sweet girlfriend Mary.

The story is pushed to extremes for the church-group producers to get their point across — Drugs are demons infesting our good kids! — but in 2014 terms I was actually surprised by how tame the film was in depicting these “raging” marijuana addicts. There’s not much more than a couple of people furiously smoking joints, a few bouts of wild laughter, and one especially hedonistic girl who takes her blouse off mid-party. Oh, and a crazed kid recklessly driving around town and plowing into an old man trying to cross the street. Of course, in the late ’30s these all would have been far more scandalous, and watching the film now expecting to be shocked is entirely the wrong frame of mind. I guess I just thought it’d be more over-the-top and funny. 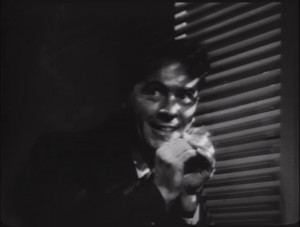 Some of what the film is saying is actually not far from the truth, too. If a good kid starts smoking pot all the time, it is a definite possibility that said kid will slack off from his school and withdraw from those close to him. I don’t know that he’d withdraw from his girlfriend, though, the opposite is probably closer to the truth. And it’s also within the realm of possibility that by entering the drug world and dealing with the shady people who inhabit it, you could find yourself in the wrong place at the wrong time. Framed for murder over marijuana? Probably a bit far-fetched, but the general idea that you are putting yourself into more danger is tangentially true.

That all being said, Reefer Madness acts like marijuana is the worst scourge that has ever infected our youth, and that it must be wiped out without reservation if we want to preserve the purity of our country. This is such bullshit that it’s funny to imagine people so adamantly against something relatively harmless compared to other drugs, including alcohol. But I’m sure there are church groups today who would watch this film and come away with the idea that it was prophetic about the degradation of our society, and that the leniency towards the legalization of marijuana happening around the country is in fact responsible for our weak moral fiber as a nation. I’m sure the bible thumpers listening to the lecture in the film would be proud to know their film was still making an impact.

But I’m not a bible thumper from the ’30s, nor am I a bible thumper from 2014. What really sunk Reefer Madness for me was that it’s just damn boring. It’s only barely over an hour and it feels like about four and a half. I’ve seen some pretty gnarly, unpolished films in my time, and I can take almost any transgressions that a film can throw at me, but being painfully boring is the absolute worst! So…

Tell your children! Reefer Madness will bore you into a film-induced madness! It will cause you to fall asleep and dream of movies of better quality! Reefer Madness is the real Public Enemy Number One! Something must be done to stop people from watching this movie and causing its reputation to grow! The next one to watch it may be your children… or YOURS… or YOURS!

Reefer Madness is part of my 2014 Blind Spot Series where I see one movie a month that I feel I should’ve seen a long time ago. It’s all the brainchild of Ryan McNeil over at The Matinee, one of the web’s premiere film blogs. Head over there tomorrow where he’ll have a post of his own for the series, as well as links to all the other people taking part in the series. And feel free to participate on your own blog as well!

Next month: The Grapes of Wrath!