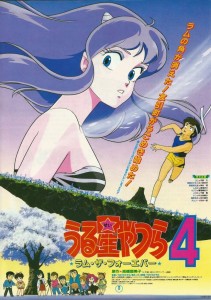 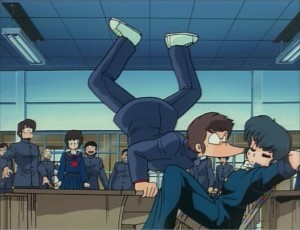 The stuff that happens is actually pretty typical for the series. What throws it into the realm of incomprehension (more than usual at any rate) is that there is no explanation for it. What’s worse is that it feels as though it should have an explanation. At one point Mendou visits his grandfather to hear a fable that in any normal film would be the critical plot point that explains the situation. I think it is here too. It’s just that we never get to hear the story ourselves. The scene cuts away just before the conversation and is never shown. Mendou takes off after hearing the tale knowing just what needs to be done even though the audience doesn’t get clued in on it along with him. There are several other places where the explanatory scenes seem to be simply edited out of the film, too.

I’m left thinking that this was deliberate. After contemplating the possible symbolism of things, I decided to latch onto one line early in the film, when the students are making their indie horror film. One character questions the plot, and the director responds, “It doesn’t matter. All the trivial things are just McGuffins.” It’s as though Yamazaki was himself saying that the explanation for the events is irrelevant, and just to prove it, he made a film that removed them all. To an extent, this makes sense. The events are so typical that anyone familiar with the series practically doesn’t need the explanations anyway. They’re just the same old pointless plot filler that we’ve seen a hundred times before. 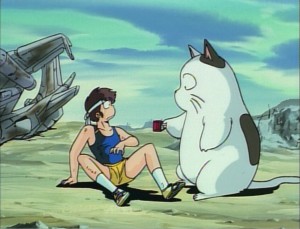 One other thing to keep in mind with this film is its timing. It released shortly after the TV series finally ended. You could view this film as a celebration of all the wackiness that had gone on for five years straight. The TV series’ ending theme song even had a chorus line that chanted, “Let’s put weird and weird together and make it even weirder,” a line that reflected the show’s rambunctious humor perfectly. The events in this film are exactly what you would expect from the series, and in that light, it makes perfect sense for the film to be a bunch of nonsense.

But while I can see where this is coming from (assuming that I am at all correct in my interpretation here), I have to disagree. The explanations in the series, all those meaningless McGuffins, were half of the humor. One of the greatest joys of Urusei Yatsura is not just watching the insanity unfold, but also seeing just what kind of cockamamie BS they would use to explain it. If we’re following that theme song, we need two weird things to combine together. Just a weird event isn’t enough. We need those weird McGuffins to complete the formula.

So I’m a bit disappointed by this film, which is strange because so far it is the closest one to capturing the tone and style of the TV series. There’s still a lot of interesting and entertaining moments, but it’s like having a bag of chocolate chip cookies without milk. Even if it’s good on its own, you still need something to wash it all down with.